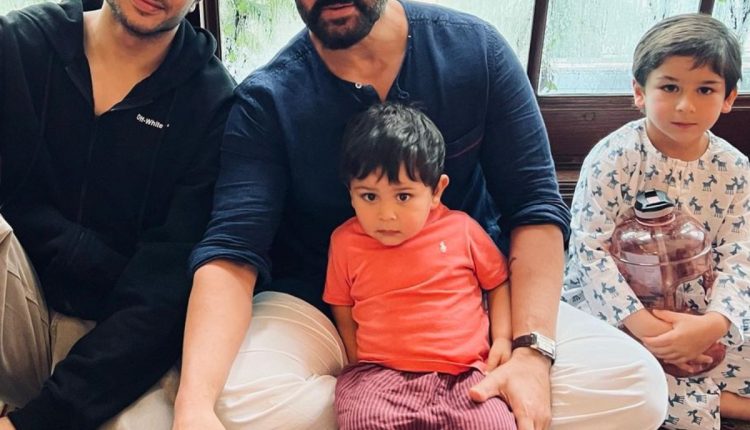 Kareena Kapoor Khan has been sharing priceless photos on her social media space today as hubby Saif Ali Khan clocks another year. Speaking of which, a few moments back, Kareena took to Instagram and shared a new picture of Saif with all his three sons Ibrahim Ali Khan, Taimur, and Jeh. Doing so, she also asked a fitting question in the pipeline. Read on to find out.

A couple of hours back, Kareena took to the photo-and-video sharing site and dropped a new picture featuring Saif with Ibrahim, Taimur, and Jeh. In the photo, all four of them can be seen seated on the floor, in a single file next to each other. The birthday man Saif looked effortlessly handsome in his blue tee-shirt and white pants. Ibrahim, who sat on his right, can be seen wearing a black jumper with grey trousers and white sneakers. On Saif’s left, we can see Taimur sitting in his adorable printed white tee-shirt and pants. Little Jeh was seen looking all adorable in his orange tee-shirt and red striped pants, as he sat on Saif’s lap. The four of them looked at the camera as they smiled for the picture.
Sharing this snapshot, Kareena asked a fitting question in the caption. It read, “Can you find a better looking gang of boys? Hmmmmmmmmm (red heart emojis) #Saifu @______iak______ , Tim and Jeh baba (black heart emoji).”
Take a look:
View this post on Instagram

Meanwhile, talking about their professional fronts, Kareena was seen in the latest film Laal Singh Chaddha co-starring Aamir Khan. She has received praise for her performance as Rupa in the movie. Directed by Advait Chandan, the official remake of Forrest Gump has received a mixed response from the audience and critics.
On the other hand, Saif will be soon seen in Vikram Vedha, which is the Hindi remake of the Tamil film of the same name. He will feature alongside Hrithik Roshan. He also has Adipurush with Prabhas and Kriti Sanon in the pipeline.
ALSO READ: Happy Birthday Saif Ali Khan: From Omkara to Laal Kaptaan, 5 times the actor aced negative roles

Corruption made its way even to Kerala CM’s office:…

Kriti Sanon surprised with cakes from paps at airport,…