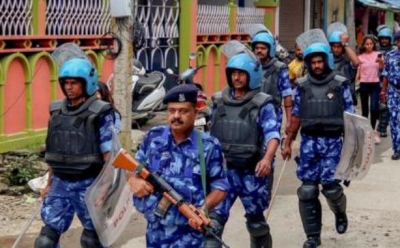 Shivamogga, Aug 16 (IANS) The situation in Shivamogga district of Karnataka continues to be tense with an attack on a Bajrang Dal activist in Bhadravathi despite prohibitory orders on Tuesday. Former minister and BJP MLA K S Eshwarappa had triggered a controversy by stating that Muslims do not own an inch of land, everything belongs to Hindustan.

Eshwarappa gave the statement while reacting to Opposition leader Siddaramaiah’s statement that the banner of Veer Savarkar was being put up in a Muslim majority area. “There is not an inch of land here which belongs to Muslims. Everything belongs to Hindustan. Nothing is being given to Muslims,” he said.

“Which is Muslim majority land? Siddaramaiah has given an anti-national statement,” Eshwarappa lashed out.

Bajrang Dal activist Sunil, who was attacked by a gang of more than 5 persons in Bhadravathi, has been shifted to the Meggan hospital in Shivamogga from Bhadravathi town hospital.

Sunil suffered a nose bone fracture and multiple injuries in the attack by local criminal element Mubarak and his gang, according to the police. Sunil had stated that he narrowly escaped being stabbed by the miscreant.

Meanwhile, the condition of Prem Singh, who was stabbed on Monday has become serious. His nerves were critically damaged in the stabbing.

Eshwarappa stated that first it was Harsha in Shivamogga, then it was Praveen Kumar Nettare in Dakshina Kannada, (both killed for involvement in Hindutva activities) and now again a stabbing incident had taken place on Monday.

It is the first time that a Muslim bad character has been shot in the leg and arrested. This is just the beginning. There is a lot more to come, Eshwarappa stated.

SPECIAL: List of actors who choose IIFA over voting