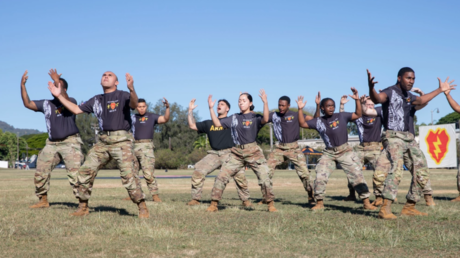 New Zealand is set to send some 120 soldiers to help train Ukrainian personnel in the United Kingdom, the government said, though stressed that there would be no direct involvement in the conflict in Ukraine.

Prime Minister Jacinda Ardern and Defense Minister Peeni Henare announced the move on Monday, noting that at least 120 troops, or two infantry teams, would travel to the UK to assist the training of 800 Ukrainian servicemen, part of a group of 10,000 London previously committed to train in “frontline combat.”

“We have been told that one of the highest priorities for Ukraine right now is to further strengthen its self-defense of country and people,” Ardern said, adding that the training would involve “weapons handling, combat first aid,” and “operational law,” among other skills.

The trainers are set to depart to the UK sometime over the next three weeks and will return in November.

While the PM boasted of more than $25.7 million in military and economic assistance to Kiev since Moscow’s military operation kicked off in February, she insisted New Zealand soldiers “have not and will not engage in combat in Ukraine’s territory,” maintaining that her country would not get directly involved in hostilities.

The latest training deployment is not New Zealand’s first, having sent around 30 soldiers to instruct Ukrainian troops on artillery operation last May, though Ardern said the new mission would be on a “much larger scale.”

Russia sent troops into Ukraine on February 24, citing Kiev’s failure to implement the Minsk agreements, designed to give the regions of Donetsk and Lugansk special status within the Ukrainian state. The protocols, brokered by Germany and France, were first signed in 2014. Former Ukrainian President Pyotr Poroshenko has since admitted that Kiev’s main goal was to use the ceasefire to buy time and “create powerful armed forces.”

In February 2022, the Kremlin recognized the Donbass republics as independent states and demanded that Ukraine officially declare itself a neutral country that will never join any Western military bloc. Kiev insists the Russian offensive was completely unprovoked.

Coming of age rituals practiced by boys around the world