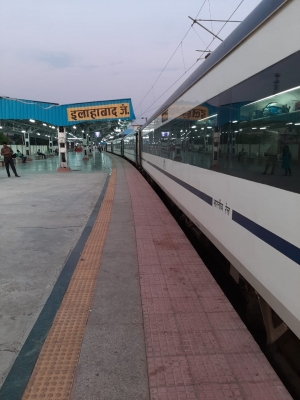 Chennai, Aug 12 (IANS) The third rake of Vande Bharat Express train that was designed, developed, and manufactured by the Integral Coach Factory (ICF) here will be tested for about 15,000 kilometres, Railways Minister Ashwini Vaishnaw said on Friday.

According to him, all tests such as static, dynamic, oscillation and others will be carried out and added that ICF will be rolling out more such trains.

Vaishnaw said 75 Vande Express trains will link all parts of the country.

Indian Railways is committed to roll out 75 Vande Bharat rakes by August 2023.

“After a wait of nearly four years, excitement at ICF as the third rake of Train 18/Vande Bharat Express has been made ready. I hope some areas, like seating in Economy Class and finish of the interiors have been improved,” ICF’s former General Manager Sudhanshu Mani told IANS.

“I also hope this rake, and the ones to follow, shall be deployed on routes where its inherent USP (unique selling proposition) of fast acceleration can be exploited to reduce travel time. Another issue which needs attention is for ICF to start work on Sleeper version Train 18 which was started in 2018 but later abandoned,” he added.