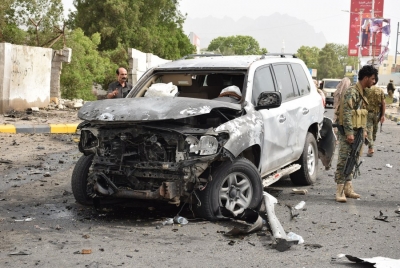 Aden (Yemen), Aug 13 (IANS) Tension between units of the Yemeni government forces flared up as the newly-formed Presidential Leadership Council (PLC) insisted on removing rebellious security officers from their positions in the oil-rich province of Shabwa, an official told Xinhua.

According to a local Yemeni official, who requested anonymity, “military leaders affiliated with the Muslim Brotherhood-affiliated Islah party mobilised their units in the neighbouring province of Marib and began advancing towards Shabwa that witnessed deadly fighting during the past days.”

He clarified that “areas near Shabwa’s borders are still witnessing sporadic fighting as the Islah party insists on capturing the authority in Shabwa from the other rival forces”.

Earlier on Friday, the Islah party issued a statement, threatening to withdraw its representatives from the PLC as well as the government in protest against the latest events in Shabwa, Xinhua news agency reported.

Another official of Shabwa’s local government told Xinhua anonymously that “the country’s Defence and Interior Ministers, respectively are still attempting to convince the rebellious officers to stand aside and hand over their armoured vehicles and heavy weapons to the new leaders appointed by the PLC”.

“But the Islah’s statement aborted the efforts that are being exerted by the Yemeni Ministers which aimed at normalising the situation on-ground and ending the deadly infighting between the pro-government forces,” he said.

On Monday, the PLC appointed new leaders to lead the special security units linked to the Islah party, triggering deadly street fighting between rival security units in Ataq, the provincial capital of Shabwa.

On Wednesday, the Shabwa Governor ordered the southern Giants Brigades troops to carry out a military operation to crack down on the rebellious troops and secure the local state facilities in the province.

The death toll from the clashes in Shabwa increased to 28, and the injuries to 68, a medical official told Xinhua on Thursday.

Yemen has been mired in a civil war since late 2014 when the Iran-backed Houthi militia seized control of several northern provinces and forced the Saudi-backed Yemeni government out of the capital Sanaa.

The war has killed thousands of people, displaced four million, and pushed the poorest Arab country to the brink of starvation.

Shamshera: Vaani Kapoor introduces her character Sona in the…

MLS, a future option for Lampard