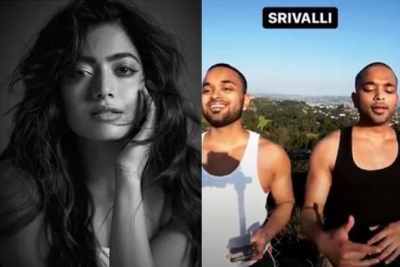 Bengaluru, Aug 12 (IANS) Rashmika Mandanna has become a national crush after essaying the role of Srivalli in ‘Pushpa – The Rise’. Apart from bringing audiences back to the theatres after the pandemic, the Allu Arjun starrer has spawned a massive fan following for lead actor Rashmika who has been going places ever since.

The actress recently took to her social media to give a shout-out to a band from LA who has posted a cover of the Srivalli song on their social media handle. The two artists from the band were seen singing the song in their voices. While tagging the artists, the actress wrote –

Rashmika’s feature in Pushpa has created a whole new fan base all across the nation. After the release of the song, the actress has been crowned the ‘Srivalli’.

On the work front, apart from ‘Goodbye’, Rashmika has the Animal, sequel of ‘Pushpa’ 2 under her kitty along with Mission Majnu opposite Sidharth Malhotra, and Varisu with Vijay Thalapatty.