Kunal Kemmu and Soha Ali Khan twin in black and serve couple goals as they get spotted in the city; PICS 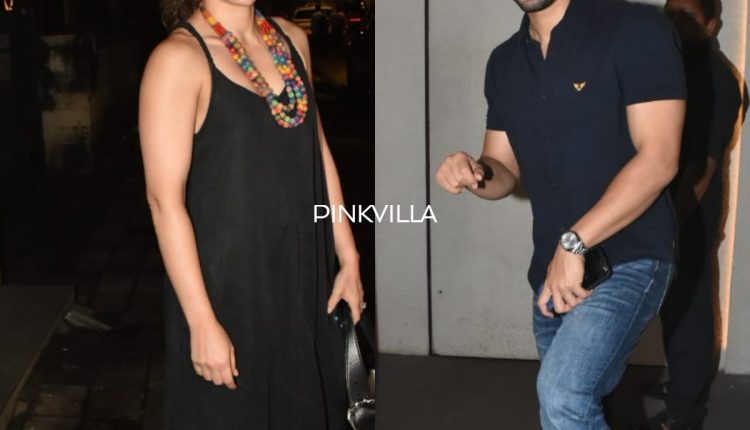 Soha Ali Khan and Kunal Kemmu are the perfect examples of millennial couples. The duo tied the knot in the year 2015 after dating for a couple of years and are going strong since then. From raising their daughter, Inaaya Naumi Kemmu with all the values to turning co-authors, Soha and Kunal never leave a moment to ignite the spark in their relationship. The power couple enjoys a massive fan following and fans wait for their pictures to come out in the public domain. Speaking of which, Soha and Kunal were clicked by the paparazzi when they were on a dinner date outside a restaurant in Bandra on Friday night.
For the outing, Soha and Kunal both had opted for an all-black avatar. Soha kept her look classy in a beautiful black maxi dress and also chose nude-toned flat footwear. She completed her look with a stylish bag. On the other hand, Kunal wore a black shirt and blue jeans. He completed his look with white shoes. The actor also accessorised his dinner date look with a cap and stylish watch. The couple looked cute together with smiles on their faces. They also posed for the cameras and acknowledged the paparazzi.

Have a look at the pictures:

To note, Kunal and Soha believe in dividing parenting duties and often set examples for fans. Talking about the same, Kunal had told News18 that true partnership works by dividing the responsibilities. However, he was all praises for Soha and said, “I have to confess that I think she does most of the heavy lifting and I’m there for the good stuff. But there are times when if Soha has to work and she is away then I have to do all of that and I enjoy doing it, but I think Soha also enjoys it, more than I do”. Kunal also admitted spoiling his little girl with ice cream.
Meanwhile, on the work front, Kunal and Soha recently turned into authors as they wrote a children’s book, Inni & Bobo, which was released on April 25th. Apart from that, Soha is currently working on a fiction show called Hush-Hush and Kunal is doing a movie titled, Kanjoos Makkhichoos with Vipul Shah and also has Malang 2.
ALSO READ: 5 Key takeaways from Soha Ali Khan, Kunal Kemmu’s and daughter Inaaya’s visit to London

PICS: Arjun Kanungo & wife Carla Dennis slay in black on their ‘first night out as Mr. and Mrs.’

Advani objects to book about him