Bengal BJP to march to Nabanna on Sept 7 protesting corruption 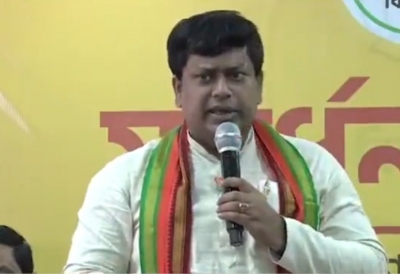 Kolkata, Aug 13 (IANS) West Bengal BJP will organise a march to the state secretariat Nabanna on September 7 over the issue of corruption at all levels in the state government, demanding the immediate resignation of Chief Minister Mamata Banerjee.

The Bengal BJP organised a protest demonstration at Esplanade on Friday where state BJP chief Sukanta Majumdar announced the party programme on September 7.

According to Majumdar, the BJP is planning to organise a statewide protest on the issue of corruption.

“The march to Nabanna is part of the agitation. The Chief Minister cannot deny the responsibility of the huge financial embezzlement for which Partha Chatterjee and Anubrata Mandal are currently behind the bars. However, she is trying to shrug off all her responsibilities on this count. So our continuous agitation will continue demanding the resignation of the Chief Minister,” Majumdar said.

Acharya Santideva: From a prince to an adept

IPL 13: Not going to over-train players in first 3 weeks,…