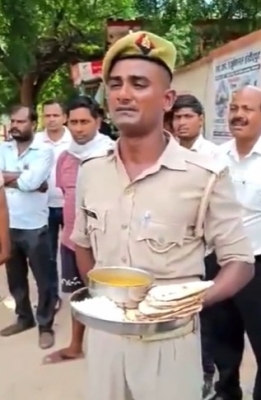 Firozabad (Uttar Pradesh), Aug 11 (IANS) A video clip of a police constable protesting over the quality of food being served to them has gone viral on social media.

The constable, Manoj Kumar, seen crying while staging a demonstration, was later whisked away by the police.

In the video clip, Kumar says, “The food that is being given is the kind which even an animal cannot eat, but it is fed to us. It is a scam by the senior superintendent of police and the DCP. Through these people police personnel are provided poor quality food.”

He also said that bad quality food was provided despite assurances given by Uttar Pradesh Chief Minister Yogi Adityanath that the allowances given to police personnel will be increased by around 30 per cent to ensure a nutritious diet for them.

The police mess manager, however, said that Kumar used to raise unnecessary hue and cry regarding the quality of food.

Kumar said, “The Reserve Inspector says that I will be suspended soon. I have told DGP sir regarding the problem several times, but till date no solution has been provided.”

Senior police officials in the district refused to comment on the video.

People’s love means the most to Alia