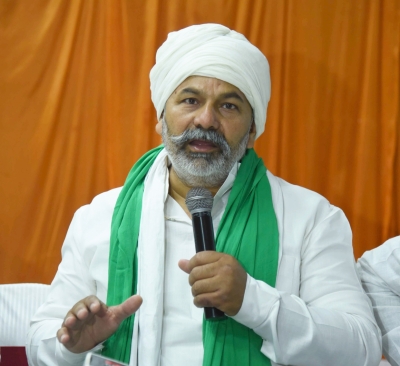 He has asked farmers to remain united and be ready for a movement, if they wanted to protect their lives and land.

Talking to reporters, Tikait accused the government of not fulfilling its poll promise of providing free electricity to farmers besides addressing the issue of rising power tariff and erratic supply in villages.

Tikait addressed the first ‘Jai Jawan, Jai Kisan’ panchayat in Bitawda village in Muzaffarnagar’s Budhana earlier this week and said that he would be addressing a series of similar panchayats in the region in the coming days.

Tikait also raised questions over the Agnipath scheme for recruitment in defence services.

The BKU leader alleged that the BJP government had exploited farmers and also raised the issue of non-payment of cane dues by sugar mills.

“The mills are not making payment of dues, which has worsened the financial condition of farmers,” said Tikait, who threatened to dump sugarcane at the office of district magistrates in the coming crushing season.

Tikait said farmers, poor and labourers were going through a tough time. “They have multiple problems, which need to be addressed but the government is ignorant towards them,” he added.