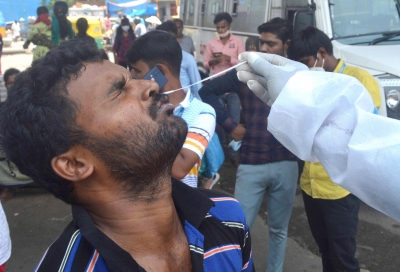 Bengaluru, Aug 11 (IANS) Karnataka has recorded five deaths due to Covid-19 after 145 days in the last 24 hours, said officials.

Among the deceased, the death of a 20-year-old woman without any comorbidities and rise of BA 5 variant has become the reason for concern. The woman was suffering from typhoid and was admitted to hospital on August 3 in Dakshina Kannada district. She contracted Covid and died.

State health department is mulling stricter restrictions, including imposing fine for not wearing masks in public places, maintaining social distance and others. A high-level meeting of Covid Technical Advisory Committee supposed to be held on Wednesday was postponed due to illness of the Health Minister Dr K. Sudhakar.

When the meeting takes place, decision on alarming situation as well as imposing restrictions will be taken, sources in the health ministry said.

According to statistics of the health department the state recorded 1,680 Covid cases in the last 24 hours. The positivity rate has been increased to 6.80 per cent and number of active cases have risen to 10,351 in Karnataka.

Health department sources explained that the cases have reached 2,500-mark in the recent past in Karnataka. The hospitalisation is also steadily increasing. The BA 5 variant, which could affect people in spite of vaccination, is fast spreading in the state.

They also explained that the BA 5 variant is found among those who had taken three doses of vaccination. In this background, the health department is concerned and mulling restrictions in the state.

Women’s Hockey Pro League: We have worked on our…

Neetu Kapoor Was Honored With An Award But Skipped The…