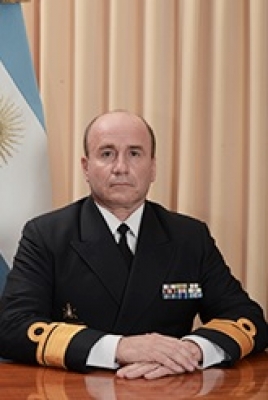 By Arul Louis
United Nations, Aug 11 (IANS) Secretary-General Antonio Guterres has appointed Argentine Rear Admiral Guillermo Pablo Rios as the head of the UN Military Observer Group in India and Pakistan (UNMOGIP) which is charged with monitoring the shaky ceasefire in Kashmir.

The UN announced on Wednesday that Rios will take over from Major General Jose Eladio Alcain of Uruguay the leadership of the 111-member operation based in both the South Asian countries.

Rios was the Argentine Joint Staff’s General Director of Education, Training and Doctrine.

He has served in two peacekeeping operations, UN Peacekeeping Force in Cyprus (UNFICYP) and the UN Truce Supervision Organization (UNTSO) in the Middle East, and supervised UN demining operations in Angola.

The UNMOGIP began operations in 1949 to monitor the ceasefire in Kashmir following a Security Council resolution the previous year.

While India allows UNMOGIP to operate in the country in accordance with the Security Council mandate, it maintains that the operation is redundant because under the Shimla Agreement of 1972 between late Prime Minister Indira Gandhi and Pakistan’s then-President Zulfikar Ali Bhutto the Kashmir dispute is a bilateral issue with no role for third parties.

In 2014, India ordered the UNMOGIP out of the government building it was lent and it moved to a commercially leased facility.

The 111 personnel under Rios’s command include 43 military experts from ten countries and 68 civilians.

All possible support being extended to states to fight…

‘Maaya’ to be remade in Kannada