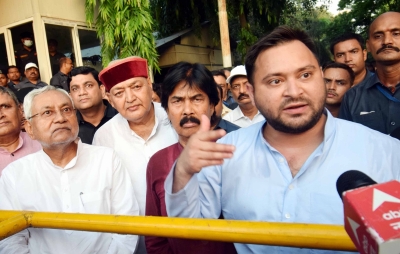 Patna, Aug 9 (IANS) RJD leader Tejashwi Yadav, who is tipped as the next Deputy Chief Minister of Bihar, on Tuesday accused the BJP of wanting to destroy all regional parties.

“BJP national President J.P. Nadda said that his party will destroy regional parties in Bihar. Bihar is a birthplace of democracy and the BJP President said that his party will destroy democracy. The people of Bihar cannot tolerate this. Today’s development is an appropriate response to it,” he said during a joint press meet with Nitish Kumar, who submitted his resignation as Chief Minister to stake claim to form a new government.

“After the JD-U separated from NDA, BJP is not left alone in the Bihar Vidhan Sabha but also in north India. Except Uttar Pradesh, you can see there are no coalition partners in Punjab, Himachal Pradesh, Delhi, Chhattisgarh, Rajasthan and West Bengal,” he said.

Tejashwi Yadav said that Nitish Kumar will remain the Chief Minister of Bihar.

“He has done exemplary works in the interest of Bihar and Bihar people. No one would forget those works done by him. We have disputes like every family has. Now, forget those things. Uncle (Nitish Kumar) and the nephew (Tejashwi Yadav) joined hands together and we are committed to work in the interest of common people of Bihar,” he said.

“Nitish Kumar has taken a bold decision after separating his party from the NDA and he should be congratulated for it. Today is the historic day as the Quit India movement was also stated from the same day on August 9, 1942. Today’s message is extremely important for leaders of all political parties in the opposition camp. If we join hands together and stand against communal forces like BJP and RSS, we will uproot them from the country.

“At present, people of the country are vastly affected by the price rise of every product, unemployment, communalism, national security, and the weak economy of the country. The BJP government is responsible for it. Today, China acquired Indian territories and developing villages. What is the answer?” Tejashwi Yadav asked.

“We are socialist people and we would not allow our legacy to be hijacked by anyone else. We are fighting against the communal forces right from the beginning. You should remember that Lalu Prasad stopped the Rath Yatra of LK Adwani in Bihar,” he said.

At the press meet outside his residence at 1 Anne Marg, Nitish Kumar said: “The way BJP was trying to sabotage our party, we have discussed aspects with our MPs, MLAs and MLCs and every one suggested that I come out from NDA. We have listened to their voices and I resigned from the post of Chief Minister.”

Asked whether he may project himself as prime ministerial candidate in next Lok Sabha election, he avoided the question with a smile, just saying leave all these things.

“We will work together with a 7 party government in Bihar and we have the support of 165 MLAs. We will do the development works in the interest of Bihar,” he said.