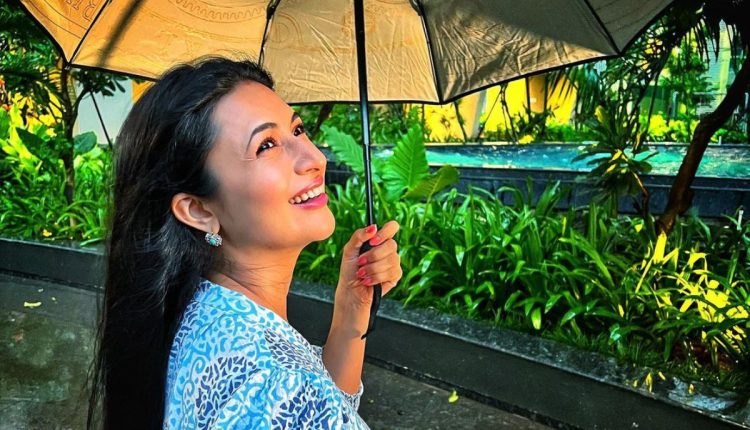 Divyanka Tripathi is among the most loved actresses of the telly industry. She became a popular name with the show, Yeh Hai Mohabbatein, where she played the role of Dr. Ishita Iyer. She has also been part of the reality show Khatron Ke Khiladi 11, where she became the first runner up. The actress is quite active on social media and has a massive fan following. The actress often shares pictures of herself on social media, which are loved by her fans. She has shared a post as she enjoys the monsoons.

In the post shared by the actress, she is seen enjoying the monsoon weather in Mumbai. She sported a blue floor length and full sleeves dress. It is a slit dress and she has paired it with white heels. She is seen holding an umbrella in her hand as she poses for the pictures. Divyanka Tripathi captioned, “Kal shaam ki baarish, dagaabaaz si rahi. Be-taiyaari nikale, bheeg gaye, Chhatri sang nikale, thamm gai! Kal shaam ki baarish, aam zindagi si lagi. Jo socha nahi, woh hota raha, jis daud mein the, wahan pohoche hi nahi!”

In the recent post shared by Banoo Main Teri Dulhann actress, she is seen seated comfortably with her reading glasses on and script in her hand. She sported a white casual t-shirt with blue comfortable lowers. Her hair is tied up and she also wore red lipstick. There is a pile of spiral binds in front of her as she goes through them. She captioned the post, “A moment of self discovery through the character I play.” It seems like the actress will be an interesting and refreshing character in her new project.

Also read- Divyanka Tripathi has a ‘moment of self discovery’ as she reads script of her upcoming project; PIC

Choreographer Shabina Khan On ‘Reality In Reality’: “I Aim…