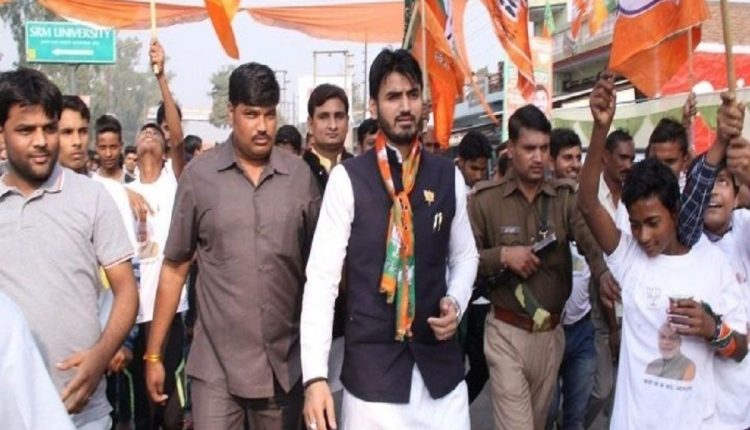 Assault
Tyagi, who was at large since Aug 5 evening, had moved a court in the Gautam Buddh Nagar district with a plea for surrender-related procedures.
PTI

Elizabeth|Twitter
Absconding Noida politician Shrikant Tyagi, who was seen abusing and assaulting a woman at his housing society in Noida, was arrested Tuesday from Meerut, officials said. Senior police officials said Tyagi’s three associates have also been held. Tyagi, who was at large since Friday evening, had moved a court in the Gautam Buddh Nagar district with a plea for surrender-related procedures. The hearing in the matter has been listed for August 10.
Tyagi had allegedly hurled expletives and assaulted the woman co-resident of Grand Omaxe who had objected to him planting trees in the common area of the society. Tyagi had claimed that he was well within his rights to do so.
Meanwhile, the Uttar Pradesh government on Monday used a bulldozer to raze illegal construction outside the ground floor apartment of the absconding politician.
So far six police officials have been suspended for alleged laxity in connection with the case, even as six aides of Tyagi who had barged into the Grand Omaxe society in Sector 93B on Sunday evening were arrested and sent to jail.
Until he went underground Friday night, Tyagi claimed he was associated with the BJP, even as the ruling party denied any links with him. The Opposition has also mounted attack on the BJP over the issue.
“Did the BJP government not know for so many years that the construction by the Noida BJP leader is illegal? Bulldozer action is only for show. The government is avoiding the answers to these questions,” Priyanka Gandhi Vadra said in a tweet in Hindi.
“Who is giving him courage to indulge in indecent behaviour with a woman and threaten women openly by sending 10-15 goons? Who is it who kept saving him,” the Congress general secretary asked.
The demolition action was carried out around 9 am by the Noida Authority to remove the illegal structures outside Tyagi’s ground floor apartment in the society, an official told PTI.
In Lucknow, Additional Director General of Police (law and order) Prashant Kumar said the UP government and the state’s police chief have made it clear that such incidents will not be tolerated.
“The in-charge of the local police station has been suspended. Besides him, a sub-inspector and four constables have also been suspended over laxity in work,” Kumar said.
He added that two personal security officers (PSOs) have also been provided to the woman complainant in the case.
Tyagi had encroached upon a portion of the common area of the society in front of his flat by constructing a temporary porch using designer wooden pillars and tiles. He had also planted trees in a park in front of his residence.
Residents alleged he was using the common space as private property.
Police personnel in large numbers were deployed at the society since Sunday evening, even as senior officers interacted with Grand Omaxe residents.
The residents lauded the government’s “bulldozer” move Monday even as some of them distributed sweets to each other on the occasion.
“We had been raising the issue of encroachment for three years and finally, it has happened. We thank the Uttar Pradesh government and the Noida Authority for it,” an elderly resident of the society told reporters.
Swati Agarwal Singh, another resident, said the residents welcomed the demolition action.
“This was long pending. The Noida Authority issued the demolition letter in 2020 only but nothing was done. But anyway, better late than never,” she told PTI.
Singh said she was the secretary of residents’ association in 2019 when the illegal constructions had started and the residents had been highlighting the matter since then.
Over 1,000 families reside in the society.
Gautam Buddh Nagar District Magistrate Suhas L Yathiraj and Police Commissioner Alok Singh had visited the society on Sunday night after a dozen of Tyagi’s aides barged into the society. Local BJP leaders had also visited the society and lashed out at the police for inaction in the case.

Couple shot dead in UP district