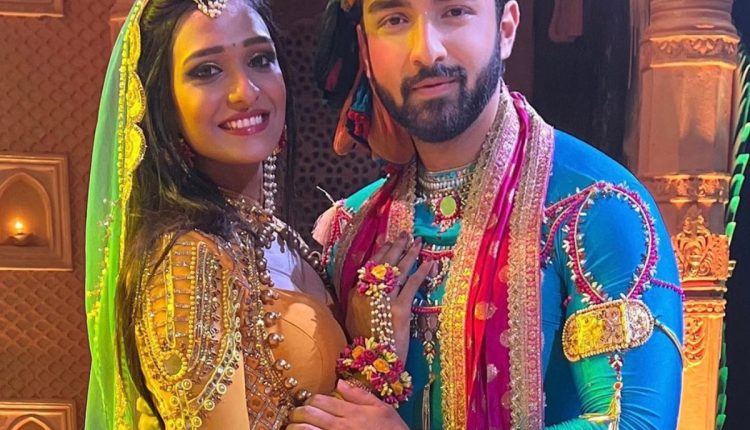 Bhagya Lakshmi starring Rohit Suchanti and Aishwarya Khare has been the audience’s favourite show on the television screens. From the time Bhagya Lakshmi started airing, it received a positive response from the masses. The twists and turns in the show kept the audiences intrigued. The stars of this show leave no stone unturned to grab the attention of their fans on screen and as well as off-screen. Rohit and Aishwarya often drop BTS pictures and videos from the sets of their show.

Today, Rohit Suchanti took to his social media handle and treated his fans by sharing his new avatar with his co-star Aishwarya. In these photos, we can see Rohit and Aishwarya looking beautiful as they dressed up as Krishna and Radha for an upcoming ‘Janmashtami’ track in the show. Sharing these photos, Rohit wrote, “Krishna & Radha”. While many showered love on their pictures, actor Manav Gohil also dropped a comment on Rohit and Aishwarya’s photos and wrote, “I actually like to see you together bro”.

Speaking about Rohit and Aishwarya, their on-screen chemistry has been doing wonders for the makers, and their pairing is immensely loved by the audience. Rohit essays Rishi Oberoi and on the other hand, Aishwarya plays Lakshmi in the show.

Bhagya Lakshmi has always ranked in the top 5 list in the TRP charts owing to its interesting storyline. The show started airing on 3rd August 2021 and recently completed one year.

Along with Rohit and Aishwarya, Bhagya Lakshmi also stars some of the most talented actors such as Munira Kudrati, Aman Gandhi, Maera Mishra, Mansi Bhanushali, Smita Bansal, Uday Tikekar, Neena Cheema and more.

TikTok rolls out enhances creation, editing tools in US