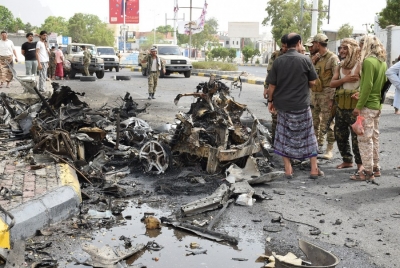 Security units loyal to the Muslim Brotherhood-affiliated Islah Party launched an attack against the rival security forces of the government in Ataq, the provincial capital, triggering intense street battles, the local government source said on Monday on condition of anonymity.

The ongoing street clashes in Shabwa have left 18 people killed and more than 25 others injured, according to local medical sources.

“The infighting occurred following the appointment of a new commander to lead the special security units loyal to Islah,” the source said.

The local government authorised the deployment of army troops from the elite southern Giants Brigades to secure state institutions in the province and confront the rebellion, according to the official.

Hours after the infighting, the Aden-based Presidential Leadership Council held an extraordinary meeting, renewing its full support for the Governor of Shabwa and ordering the special security units to immediately stop the clashes, Xinhua news agency reported.

The Yemeni Council issued new decisions that included dismissing a number of security and military leaders accused of organising a rebellion against the local authorities in Shabwa, according to the state-run Saba news agency.

Yemen has been mired in a civil war since late 2014 when the Iran-backed Houthi militia seized control of several northern provinces and forced the Saudi-backed Yemeni government out of the capital Sanaa.

The war has killed thousands of people, displaced 4 million, and pushed the poorest Arab country to the brink of starvation.

Aamir Khan: A look at his films in the last decade and their box office numbers

‘Money Heist: Korea’ climbs to the top of…