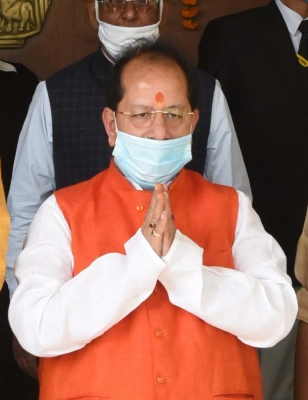 Sinha, on his official Twitter handle, had on Sunday posted that he had tested positive for Corona, and appealed to everybody who was in contact with him to follow Covid protocols and get themselves tested. He also announced that he was going into isolation.

On Monday, he again uploaded a message on his official Twitter handle, saying that he turned corona negative “with the blessings of god”. “I am returning to the ‘Karma Path’. Don’t be afraid of Corona. We have to be alert with it to defeat Corona and make our society healthy”.

His transition from positive to negative in one day is a matter of discussion in the political circle of Bihar, particularly as his BJP’s Mangal Pandey is the Health Minister.

Sinha know how crucial his role would be if Nitish Kumar separated his JD-U from the NDA and formed the government with the help of the Mahagathbandhan.

Nitish Kumar may not resign as Chief Minister but he will have to prove the majority in the house. In that case, the BJP may play a game with the help of its Speaker.

If Sinha was not there, JD-U’s Maheshwar Hazari would preside over proceedings and it would be a cakewalk for Nitish Kumar to prove his majority.

When the Mahagathbandhan came in power in 2015, RJD supremo Lalu Prasad Yadav had a choice to take the post of Speaker but opted for the Deputy CM’s post for his son Tejashwi Yadav and Health Minister’s post for his elder son Tej Pratap Yadav. Then, Nitish Kumar smartly took the Speaker’s post for the JD-U and put Vijay Kumar Chaudhary on the chair.

As Chaudhary was the Speaker, Nitish Kumar did not face any hurdle when he went back with the BJP in 2017 and formed the government.

The BJP does not want to make any mistake like this, as the negative report of Sinha shows.

If Nitish Kumar goes with Mahagathbandhan, the number would not be the matter for him to prove the majority in the house.

At present, the RJD has 79 MLAs, the JD-U has 46, the Congress has 19, Left parties have 16 MLAs and there is one Independent Sumit Singh. The remaining one AIMIM MLA Akhtarul Imam may also vote for Nitish Kumar. Hence, the total number of MLAs is 162 which is way beyond the majority level. In Bihar Vidhan Sabha, the total number of seats is 243 and the majority required to form the government is 122.

On the other hand, 18 MLAs of the RJD are facing charges of misbehaving with the Speaker in the past. The report of the disciplinary committee has already been submitted with him. He might take action against them.