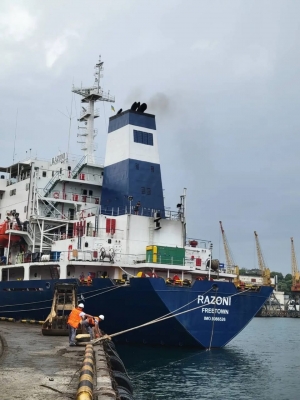 It is the first vessel carrying grain from Ukraine through the Black Sea since Russia invaded in February. The Razoni, loaded with some 26,000 tons of corn, departed from Odessa on Monday, dpa news agency reported.

It arrived at the Black Sea entrance to the Bosporus Strait in Istanbul and is now anchored at an assigned spot, the Turkish Defence Ministry said on Twitter.

Representatives from Ukraine, Russia, Turkey and the United Nations are set to board and inspect the ship on Wednesday morning.

The inspections are meant to ensure vessels are not being used as a front to smuggle items such as weapons.

Afterwards, the Sierra Leone-flagged ship is to pass through the Bosporus Strait, into the Mediterranean and then dock in Lebanon.

The supplies from Ukraine are expected to unlock millions of tons of grain for export onto the world market.

The warring parties plus Turkey struck a UN-mediated deal on July 22 to allow the exports from Ukraine from three ports. They also agreed to the establishment of a control centre in Istanbul.