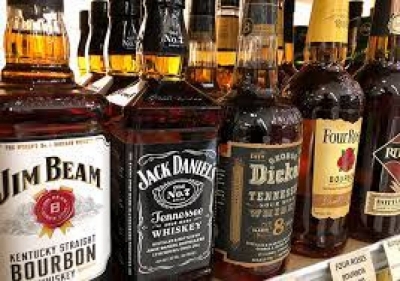 CCTV footage from the liquor shop shows two men walking into the store and approaching the salesman. One of them took out a handgun while the second demanded cash from the salesman. The cashier complied and the men got away with an unknown amount of cash late Saturday night.

They fired one round in the air but no one was injured, police said.

The robbers then fled.

Ashok Kumar, Surender Singh and Danesh, the salesmen, informed the police about the crime.

The salesmen claimed they were threatened by the armed men at gunpoint. Around Rs 5 lakh in cash were looted from the liquor shop, but the actual amount is yet to be confirmed by the police.

“When one of us tried to stop the accused, his accomplice fired in the air to threaten us and hit with the gun butt,” Ashok Kumar, the complainant, told the police.

An FIR has been registered at Sadar police station under Section 392 (punishment for robbery) of the IPC and sections 25, and 54 of the Arms Act.

“The accused had covered their face with masks and clothes. The robbed amount is yet to be known. We have checked the CCTV footage and hope to nab the accused soon,” Sub-Inspector, Chunni Lal, in-charge of Jharsa police station told IANS.

Believe in quality, not quantity: Bhumi Pednekar on films