Prayagraj to revamp heritage bridge, turn it into a tourist magnet 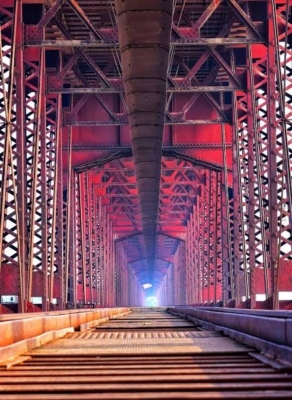 <br>Chief Minister Yogi Adityanath has finalised the action plan to beautify the bridge.

As per the work plan, Ganga gallery will be established on the bridge. The land on both sides of the bridge belongs to the Railways on which facilities like washrooms, parking, cafeteria etc will be built.

The bridge will display the journey of Maa Ganga to Gangasagar. Along with this, it will provide a chance to see and understand the mythology, religiosity and cultural heritage of Prayagraj through light and sound.

There is also a plan to sell Indian delicacies, crafts, etc. through mobile vehicles on the road above the bridge.

With this, tourists will not only get information about the importance of this bridge and the Ganga, but the local people will also get employment.

If the bridge’s beautification is completed, then the people of Prayagraj will also get a new place for morning walks and evening relaxation.

Since times immemorial, Prayagraj has been world famous for the Kumbh, so ‘samundhra manthan’ will be showcased.

The flow of the Ganga will be channelised by the irrigation department and there will also be a facility to ferry people from Curzon Bridge to Sangam.

Curzon Bridge on the Ganga in Prayagraj, connecting Phaphamau and Prayagraj, was approved in 1901 in the name of Lord Curzon, who was the Viceroy of India from 1899 to 1905 and its construction started in January, 1902. A 61-meter-long girder and 15 pillars have been used for this. The Singanbad gauge railway line passes on the underside of the bridge and the road above.

Till 1990, this bridge was operational. Considering the old bridge as unsafe for travel, the Railways decided to close and demolish it in 1998. The Ganga Gomti Express was the last train to pass on the bridge before its closure.

The Chief Minister has given instructions to make a glass floor and railing on both sides of the bridge to make it look attractive.

The bridge is also witness to the freedom struggle and was used during the Kumbh.

Principal Secretary, Tourism and Culture, Mukesh Meshram said that the construction of a gallery on Curzon Bridge and completion of other tourism development schemes will increase the inflow of tourists, which will generate revenue along with employment.

Through this, the public will come to know the various cultures, spirituality, food, living habits that have flourished on the banks of the Ganga for centuries.

Grievance committee for street vendors to be set up soon