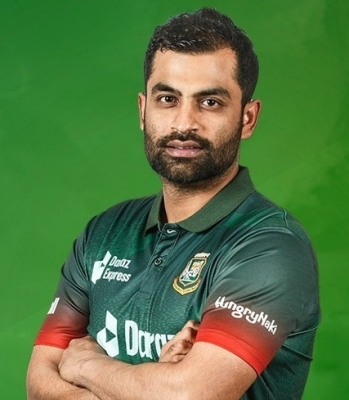 Dhaka, July 17 (IANS) Bangladesh’s most successful opener and One-day International captain Tamim Iqbal has announced his retirement from T20 Internationals, choosing the side’s 3-0 ODI clean sweep against the West Indies at Guyana on Monday (IST) as the occasion to make the huge career decision.

The 33-year-old scored a patient 34 in the third ODI against the West Indies as the tourist won by four wickets to finish the Caribbean tour on a high. Soon after, Iqbal took to social media to announce his retirement from the shortest format of the game.

“Consider me retired in T20 Internationals from today. Thank you all,” Iqbal wrote in a Facebook post from Guyana. The prolific run-getter was adjudged ‘Player of the series’ for the sixth time in his ODI career.

Iqbal had only a few days back hinted at retiring from ODI cricket after the 2023 World Cup in India, being quoted as saying by Espncricinfo that, “2023 World Cup probably will be one of the biggest events for all of us, especially four of us who are most likely to end there and we have to make the best possible combination and best possible team going forward.”

However, his decision to retire from T20Is as Bangladesh celebrated the ODI series triumph against the West Indies came as a surprise to his fans.

“Why such a status at midnight? You deserve to leave the field with your head high and love from thousands of people. We would consider it (retirement) then. Why now? Sorry captain. We don’t accept it. No one in the cricket world would accept such a departure, because cricket-loving people want to bid you goodbye with honour,” wrote a fan on his facebook page.

In January, Iqbal had announced his decision to take a break from T20Is for at least six months to prolong his career and give youngsters a chance, a decision which virtually had ruled him out of contention for the T20 World Cup in Australia later this year.

“The (BCB officials) obviously want me to continue playing until the (T20) World Cup. But my issue was different. I’ve taken a decision which will fare well for all. I’m not thinking about T20 Internationals for the next six months. I’ll put all my focus on Tests and ODIs in these months,” Iqbal had said.

He pulled out of a T20I series against New Zealand and flew back home after the ODIs in March last year citing “personal reasons”. He also dropped out of the 2021 T20 World Cup in the UAE, saying he had taken the decision because he had been away from the T20 cricket for a long time. An injury then ruled him out for a T20 series against Pakistan.

As Covid cases surge in UK, ECB worried overseas players might give The Hundred a miss

Jaipur -based private firm deploys robots to reduce risk of…