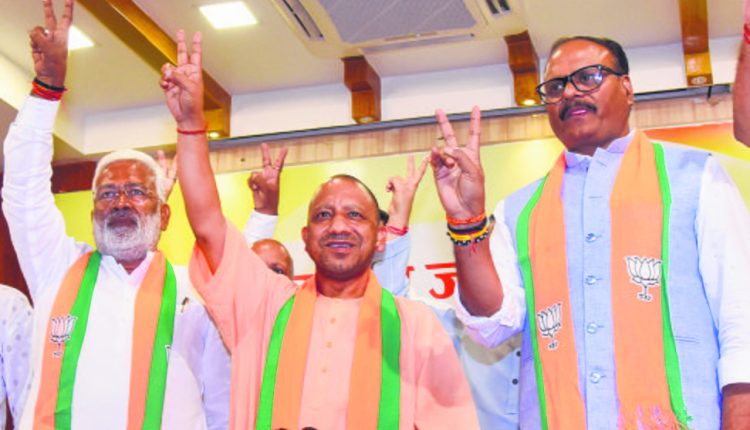 Coming close on the heels of Uttar Pradesh Chief Minister Yogi Adityanath’s “bulldozer politics”, the byelection wins in Rampur and Azamgarh has boosted BJP’s morale in Uttar Pradesh while the SP has paid the price of being complacent.

People have sent a message against dynastic and caste-based parties and those who incite communal tension. — Yogi Adityanath, UP Chief Minister

Samajwadi Party chief Akhilesh Yadav did not campaign in Azamgarh and Rampur even once, counting on the family loyalty factor. CM Adityanath, on winning the two SP bastions, said: “People have sent a message against dynastic and caste-based parties and those who incite communal tension. Today’s victory has signalled that in 2024, the BJP will win all seats in Uttar Pradesh.”

He referred to the BJP’s consistency in poll victories — two-third seats in the last Assembly poll, a thumping majority in the Legislative Council elections and now two LS seats earlier held by the SP top brass — to say the BJP was here to stay. With today’s victories, the BJP has 66 seats in the LS from UP whereas the SP stands reduced to three. Akhilesh accused the ruling party of deceit and misuse of state machinery.

“Here is the chronology of the murder of democracy — conspiracy to reject nominations, suppress candidates, misuse machinery to prevent voting, irregularities in counting, pressure on public representatives and toppling of elected governments. This is the bitter truth about Azadi ke Amrit Kaal,” Akhilesh tweeted after cousin Dharmendra Yadav lost to greenhorn Nirhau of the BJP in Azamgarh, which the SP chief vacated after winning from the Karhal Assembly seat in the state polls recently.

BJP sources privately said the twin victories were a sweet revenge for the Gorakhpur and Phulpur LS bypoll losses in 2018.

Lahiri to tee off with Moore in US Open