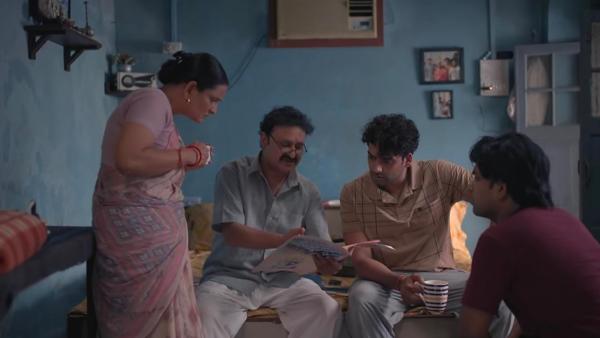 Web Series description:
Gullak Season 3
Creator: Shreyansh Pandey
Director: Palash Vaswani
Cast: Jameel Khan, Geetanjali Kulkarni, Vaibhav Raj Gupta, Harsh Mayar, Sunita Rajwar
Streaming On: SonyLiv
Rating: 3.5 / 5
The mundane lives of the Indian middle class is a gift that keeps on giving. To be honest, in the times of the grossly overdone crime thrillers on the streaming platforms, TVF’s Gullak Season 3 is a breath of fresh air. Created by Shreyansh Pandey, the series just released its third season tonight. The Mishras are back with their ever-relatable struggles and aspirations served with a side of humour, observation, and reflection.
The creators and writers must not have agreed with the easy translation of Gullak to ‘piggy bank’ in previous writings about the show. For, they make it a point to clarify the difference, “Gullak – not to confuse with ‘piggy bank’ – woh plastic se bannta hain, aur main mitti se”. This is one of the many times when Durgesh Singh’s writing has shone through. For, Gullak is definitely a piggy bank in its literal sense. But it strips the show and its characters of their essence, for the stories are not plastic. They are real, unfiltered, and vulnerable.
Like its previous seasons, Season 3 also has no definite plot structure. Instead, the five-part series with an average runtime of 30 minutes per episode is loosely based on a theme. This format rightfully justifies the show’s title song – that it’s about a ‘collection’ of memories and anecdotes.
This time around, too, Santosh Mishra (Jameel Khan), his wife Shanti Mishra (Geetanjali Kulkarni), and their two sons, Anand ‘Annu’ Mishra (Vaibhav Raj Gupta) and Aman Mishra (Harsh Mayar) are engaged in seamless bickering over a slew of things, so much so, that it almost becomes white noise in their lives.
Season 3 is different because it takes us a little deeper into the characters’ lives, giving viewers insight into their human sides and vulnerabilities. Jameel Khan and Geetanjali Kulkarni are commendable in the chemistry and energy that they bring to the screen. Their experience in front of the camera is evident in their seasoned acting. Harsh Mayar gets the tonality of playing the younger sibling just right- someone who complains that he is never a part of the ‘real’ conversations at home, yet, always the one to lighten up a heavy moment with silly remarks.
Vaibhav Raj Gupta’s character Anand undergoes a massive transformation. He ‘comes of age’ in the truest sense. Now that he has started earning, he becomes a person of his own, with his feet closer to the ground. Vaibhav embodies this experience, and delivers a believable, relatable performance.
But the hero, at the end, is the Gullak, the omniscient narrator, who makes deep observational commentary in an easy-going and light-hearted manner. Voiced by Shivankit Singh, Gullak perfectly sums up the intentions behind the episodes, and more often than not, it’s served like some food for thought.
Truly, Gullak season 3’s strengths lie in the witty, reflective, and empathetic writing, clubbed with the commendable performances by the entire cast. The Mishra’s casual family banter touch upon things we all have been privy too, like, the age-old debate between Science and Arts, the security in government jobs, and the money in the private sector, etc. And if you listen with care, you will find some clever social commentary on a range of relevant subjects as well.
A review of Gullak Season 3 will be incomplete without mentioning its music by Anurag Saikia. The title song is simple, short, and crisp. And its beauty is elevated by the equally captivating cinematography. Every signifier in the song has a signified. The humble, ordinary, and often overlooked life scenes look striking: the tangled cable wires, a squeezed, almost-dead toothpaste tube, a washed mortar and pestle, papads and chillies kept out in the sun.

Watch the trailer of Gullak Season 3 below:

TVF gets family dramas right. Be it Saurabh Khanna’s Yeh Meri Family, or Shreyansh Pandey’s Gullak. The stories about India’s Guptas and Mishras are rooted, closer to home, and garnished with pleasant nostalgia.
You can watch Gullak Season 3 on SonyLiv.

Gullak S3 Twitter Review: Fans give thumbs up, say ‘The only series that gets better with every season’

RJD holding talks with Congress over alliance for Delhi…

Shreyas Iyer happy with his job as Delhi skipper