Nuclear war is ‘within the realm of possibility’ – UN chief 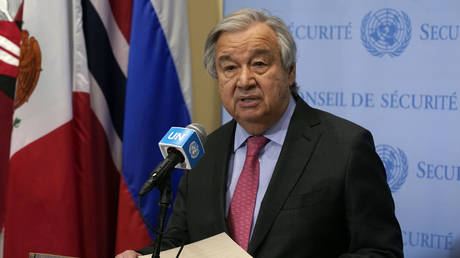 Antonio Guterres told reporters that the war in Ukraine “will have no winners, only losers”

United Nations Secretary-General Antonio Guterres warned on Monday that an ongoing escalation of war in Ukraine ”whether by accident or design” will threaten the entire humanity. He further alarmed that the conflict may end up in the nuclear apocalypse.

“The prospect of nuclear conflict, once unthinkable, is now back within the realm of possibility,” Guterres said.

Guterres’ comments on nuclear war were made in relation to President Vladimir Putin raising Russia’s deterrent forces – which include various strategic weapons, both nuclear and conventional – to “special” alert last month, a development the UN chief called “bone-chilling.”

On the Western side, some pundits and politicians in Europe and the US are pressing for NATO to declare a “no-fly zone” over Ukraine, a move that would see the alliance commit to shooting down Russian aircraft in Ukrainian skies, and bring nuclear superpowers into open conflict with each other. NATO leaders have thus far resisted these calls for war, and Washington has repeatedly insisted that it will not engage Russia militarily unless a NATO member is attacked.

Aside from the specter of nuclear conflict, Guterres warned that “this war will have no winners, only losers.” The world’s poor will be particularly affected by soaring food prices, he said, noting that “Ukraine alone provides more than half of the World Food Programme’s wheat supply,” and that Russia and Ukraine combined account for half of the world’s sunflower oil supply and a third of its wheat.

“This war goes far beyond Ukraine,” he said. “A sword of Damocles hangs over the global economy, especially in the developing world.”

Guterres said that the UN would allocate $40 million to provide food, aid and cash to Ukrainian civilians affected by the conflict, and that he personally had been indirectly in touch with Putin to discuss ending the conflict. The UN, he said, had also reached out to a number of third countries, including China, to discuss mediating negotiations.

Russian and Ukrainian delegations met virtually on Monday for a fourth round of peace talks, which were then paused and scheduled to resume on Tuesday. Ukrainian President Volodymyr Zelensky said on Sunday that he hopes these talks will lead to a personal meeting with Putin.

Russia launched a military offensive in Ukraine in February, with Putin stating that Russia intends to “denazify” and “demilitarize” its neighbor, and ensure that it does not join the NATO alliance. The attack came after a seven-year standoff in which Moscow accused Kiev of committing “genocide” against the Russian-speaking breakaway republics in the Donbass region, whose independence Putin recognized days before the military offensive commenced.

Russian pianist chained himself to McDonald’s