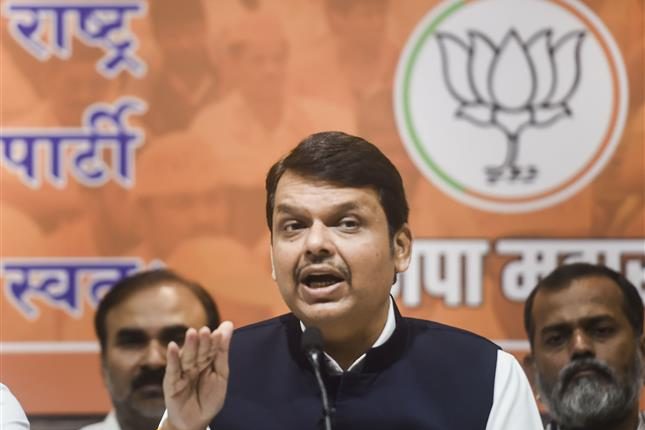 Mumbai cyber police have issued a notice to senior BJP leader Devendra Fadnavis, asking him to appear before them on Sunday in connection with a case of alleged illegal phone tapping, an official said on Saturday.

Talking to reporters, Fadnavis said he had received the notice and he would visit the police station at 11 am on Sunday as being asked.

The police official said, “In the notice issued to Fadnavis, police have said that questionnaires were earlier sent to him in sealed envelopes in connection with the case, but he did not respond to them. Besides, notices were also issued to him twice to seek his reply, but he had again failed to reply.” In addition to this, three letters were sent to Fadnavis, reminding him to appear before the police. However, he failed to give any reply. In the fresh notice, he has been asked to appear before the cyber police on Sunday, he said.

A case was registered under the Official Secrets Act at the BKC cyber police station in Mumbai last year against unidentified persons for allegedly illegally tapping phones and leaking confidential documents. The complaint was lodged by the State Intelligence Department (SID).

However, before the FIR was registered, the then Maharashtra Chief Secretary Sitaram Kunte had alleged in his inquiry report that IPS officer Rashmi Shukla had leaked the confidential report.

Shukla is accused of tapping phones of political leaders and senior officials illegally when she was chief of the SID. She found herself at the centre of controversy after Fadnavis cited a letter purportedly written by her to the then Maharashtra Director General of Police about alleged corruption in transfers in the police department.

The letter also had details of intercepted phone calls, leading to an uproar with leaders of the Shiv Sena-led ruling coalition alleging that Shukla tapped phones without permission.

In April last year, the Mumbai police had summoned Shukla for interrogation before the BKC cyber cell. She did not turn up citing the coronavirus pandemic. In May, a team from the Mumbai cyber police recorded her statement in Hyderabad in connection with the phone tapping leak case.

Meanwhile, talking to reporters, Fadnavis said, “BKC cyber police have issued an inquiry notice to me. I will visit the police station tomorrow at 11 am.” “The notice is served to me because I exposed the MVA government. I demand that the investigation of this (phone tapping case) should be handed over to Central Bureau of Investigation (CBI). The state government cannot conduct a proper probe in such cases,” he said.

“The state is trying to pressure me because I had exposed the scam of transfer in the state police force…I have more proofs with me, which I will hand over to the CBI only. I will cooperate with the Mumbai police in tomorrow’s probe as well,” he said.

The leader of opposition in the assembly alleged that the state government and the police department have panicked, which is why the notice has been issued to him.

Interest on EPF deposits fixed at 8.1 per cent; lowest since 1977