Neymar mocked for ‘one of worst penalties you’ll ever see’ 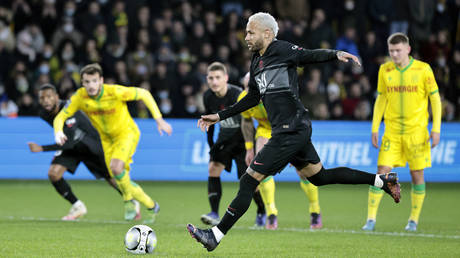 The spot-kick shocker occurred around the hour mark in a Saturday night fixture against Nantes. To the surprise of many, the home side were 3-1 ahead against Neymar’s Ligue 1-leading outfit.

And though the Brazilian scored PSG’s only goal of the game just after half-time, Neymar failed to reduce the deficit further 11 minutes later when given the opportunity from 12 yards out.

First kissing the ball before placing it on the spot, the world’s most expensive player shimmed to the side and ran up to it before taking a pause for a short tap dance.

He then meekly tapped his effort slow and low for Alban Lafont to keep out easily, just by dropping to the turf towards his left post.

Neymar looked on in disbelief to loud cheers and heckles from the crowd at the Beaujoire Stadium. And online, the reception he received was no better.

Wtf is this pen from Neymar😭😭😭 pic.twitter.com/2cc70kJCAd

Neymar out there taking the penalty miss challenge so personal

Such an over rated player

The ex-Barcelona forward’s attempt was quickly called “dismal”, “one of the worst penalties you’ll see this season”, the “worst of his career” and an even more dramatic “worst penalty miss ever in football history”.

“Neymar [is] out there taking the penalty miss challenge so personal,” a punter concluded.

“Such an overrated player,” balked a separate party.

Neymar has missed just 3 out of his 26 penalty attempts at PSG and he has been using the same technique throughout his term here. People need to stop overreacting to the miss. He’s still PSG’s best penalty taker.

Defenders of the Santos academy product noted that Neymar “has missed just three out of his 26 penalty attempts at PSG and he has been using the same technique throughout his term here”.

Neymar with the worst penalty of all time just to make Messi’s miss vs Madrid look better. What a friendship ❤️

Ronaldo would never get scared of missing. He would always lead by example.

Mbappé has won penalties in back-to-back games for PSG. Messi missed the first one and Neymar has now missed the second.

As always, however, fanboys of certain players found a way to criticize Lionel Messi by saying that the Argentine “gave the penalty to Neymar because he was too afraid to miss it himself” following his failure from the spot against Real Madrid in the Champions League earlier this week.

“[Cristiano] Ronaldo would never get scared. He would always lead by example,” the user added.

Similarly, someone pointed out that Mbappe “has won penalties in back-to-back games for PSG”. “Messi missed the first one and Neymar has now missed the second,” it was noted.

In any event, neither of the trio came out of the defeat smelling of roses with L’Equipe handing out terrible 3, 4 and 5 out of 10 ratings to Mbappe, Messi and Neymar respectively.

L’Equipe at it again with the ratings pic.twitter.com/yKgy6Inbtd

Elsewhere, Neymar has risked controversy in his homeland by blasting Brazilians and the way they support the national team known as the ‘Selecao’ or the ‘Selection’ in Portuguese.

“Nowadays the Selecao has become very distant from the fans,” Neymar complained on the Fenomenos podcast

“I don’t know how this happened, but our games today are talked about little. And it’s sad to be living in this generation where the Brazilian national team doesn’t feel important when it plays,” Neymar continued.

This development is due to a myriad of reasons such as expensive ticket prices when Brazil play World Cup qualifiers at home that are out of the reach of most in a land where the national minimum wage is just over $230 a month.

Brazil compete far more often in the Middle East and Europe, which is where most stars enjoy their club football and often head to not long after turning 18 making it difficult for Brazilian fans to familiarize themselves with their charges.

‘Neymar: The Perfect Chaos’ – welcome to the world of a football diva in denial

Given his recent comments and the pressure he feels to deliver an elusive record sixth World Cup title in Qatar, though, the tournament Brazil have already qualified for later this year may indeed be Neymar’s last.

“I see it as my last because I don’t know if I have the strength of mind to deal with football anymore.

Looking to put his penalty miss behind him, Neymar will return to action for PSG next Saturday at home against St-Etienne and runs out for Brazil again in late March to take on Chile.

‘No pressure from Army’, says Imran Khan amid…