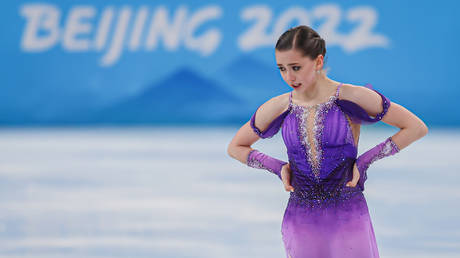 Russian figure skating stars Alexandra Trusova and Anna Shcherbakova have assessed their Olympic debut after completing their short programs in Beijing, although event leader Kamila Valieva did not appear for media duties.

Explaining Valieva’s absence in the press corner, Russian officials said that “she didn’t feel well after the competition” and it was decided to take her straight to the Olympic Village where she can rest after an emotional day.

The 15-year-old won the short program in Beijing with a score of 82.16 points, although the tally is some way short of her world-record best.

It was enough to put Valieva ahead of fellow Russian Shcherbakova, who also broke the 80-point barrier by earning 80.20 points for her routine.

Japan’s Kaori Sakamoto sits third with 79.84 points, while Russia’s Trusova is currently in fourth place after receiving 74.60 points from the judges.

‘Quad Queen’ Trusova had another unsuccessful attempt to land a triple axel in her routine, but said she didn’t regret it and will continue to polish the element.

“[Removing] a triple axel [from the routine] has never been and will never be discussed. I will always do it. Regardless of my physical conditions I can easily land it at training, but not during performances so far,” said the 17-year-old.

“I don’t pay much attention to the current fourth place. I’m skating just for myself and will skate only for myself. My technical content in the free skate depends only on my shape and nothing else,” she told the media.

“I wasn’t nervous and was determined to do all the elements, including the triple axel. Usually I feel that it might not work out, but today there was no such feeling. After the fall, I didn’t think about anything, I tried to stick to the role and not spoil the overall impression of the routine. I think I got it.

“The scores are not surprising. They are always like this if I fail to land axel,” she added.

Trusova is expected to improve her position in the final standings, given that she will be one of the few competitors to attempt quads in the free skate.

Last year, the skater made a stunning comeback at the World Championships, rising from 12th place after the short skate to the bronze medal position overall.

Reigning world champion Shcherbakova, who is placed second after the short program, underlined that she was focus during her skate.

“I felt that I had control of every single moment. Yes, I have new skates, but it doesn’t bother me much. Indeed, I cried during practices, but I’m just very emotional, this is typical of me.

“The main thing is to pull yourself together at the most important moment,” she added.

Shcherbakova, who has two quads under her belt ahead of the free skate, seems set to vie for gold together with teammate and training partner Valieva, who posted the highest score on Tuesday.

Valieva’s score of 82.16 points was enough to lead the competition but was her lowest of the season for a short skate routine, and some way off her world record tally of 90.45.

Valieva declined to talk to the media after her performance, following the doping ordeal which emerged after she had already helped the ROC to gold in the team event last week in Beijing.

Neither Trusova nor Shcherbakova commented when asked about their teammate’s case.


READ MORE: As Valieva targets Olympic glory, there can be no winners in Beijing

King Khan’s fans ask him to ‘Take Care’ amid ongoing…

Gaurav Dubey is ready to make everyone laugh with his…