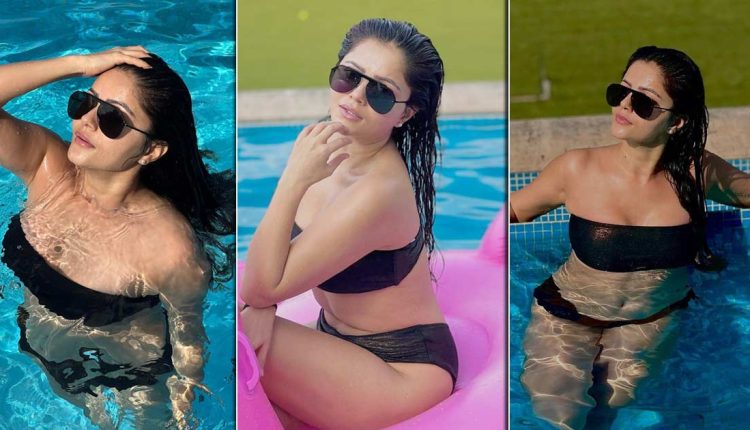 Bigg Boss 14 winner Rubina Dilaik is one of the popular actresses in the television industry. She is well known for portraying Radhika in Choti Bahu and Soumya Singh in Shakti – Astitva Ke Ehsaas Ki. Now the actress has taken the internet by storm with her latest photos of herself in a bikini.

Rubina is quite active on social media. Often she shares bold pictures on Instagram and creates a storm on the internet. The actress is now at it again and decided to woo her massive fan following on social media with her latest pictures.

Rubika Dilaik shared a series of pictures wherein she can be seen sunbathing in the pool on an inflatable flamingo floater with her shades on alongside her girl pal Keerti Gaekwad. Dressed in a black tube bikini and dark black shades, Rubina sported a chic all-black pool look.

The Bigg Boss 14 winner looked stunning with her hair down and no make-up on. While Rubina sported black bikini, Keerti Kelkar was in blue bikini. Sharing the picture, she captioned it, ‘goodvibes only ????’ (sic) Take a look at her picture below:

Rubina Dilaik and Keerti Kelkar are mermaids in these pictures!

Soon after she shared the picture on Instagram, netizens went berserk and showered her with compliments in the comments section. Shristi Rode wrote, “Woaahhh 🔥 love it 😍” while another user wrote, “Paani mai aag laga di🔥🔥🔥” A third user commented, “Just can’t take my eyes off from you🔥🔥🔥”

Previously, during a conversation with RJ Sidharth Kannan, Rubina Dilaik said that they overcome marriage problems and they have a better understanding. She also clarified that they aren’t planning to have children just yet.

Dolly Parton says ‘Nobody gives Miley Cyrus advice’; Jokes ‘she is as headstrong as I am’

Moment of national pride: Yuvraj on 37 years of…