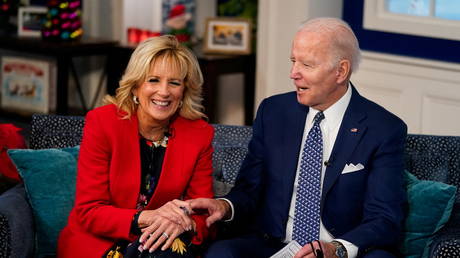 A Christmas Eve call with children went off script for US President Joe Biden on Friday morning when one of the parents dropped the ‘Let’s go Brandon’ chant used to mock the president.

Biden was wishing children a Merry Christmas during an annual phone call as he was following the North American Aerospace Defense Command (NORAD) Santa tracker together with his wife, Jill. Things went awry when a dad, identified as Jared from Oregon, closed his call by wishing Biden a “wonderful Christmas” and adding “Let’s go Brandon.”

The euphemism took off in October when a reporter misheard the chant ‘F**k Joe Biden’ for ‘Let’s go Brandon’ while interviewing NASCAR driver Brandon Brown. The phrase immediately became popular among Biden’s critics, who used it to express their opposition to the president and mock him. It has since been used as a slogan, written on protest signs, and even used in congressional speeches by some Republicans.

Video of the incident has since surfaced on social media. It is unclear if Biden got the meaning of the phrase but he responded by saying “Let’s go Brandon, I agree,” without missing a beat. The president then asked the caller if he was from Oregon, but he was already off the line.

Hazlewood unlikely for Boxing Day Test, Jhye may be in XI

‘Is Raavan a Targaryen?’ Twitterati has field day over…