Zenit, Chelsea, Barcelona – who needs what in the Champions League? 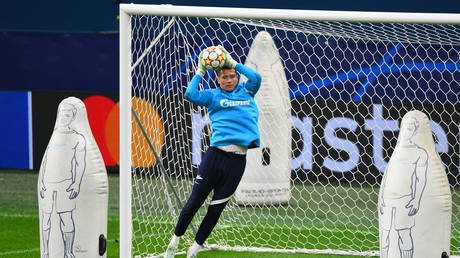 Zenit St. Petersburg’s hosting of Chelsea on Wednesday is part of a final round of Champions League group stage matches that begins with the fate of 17 teams from across Europe hanging in the balance. Here’s what could happen.

With one game left to play for each of the 32 teams involved in this season’s Champions League group stage, qualification for the round of 16 of Europe’s most prestigious competition is yet to be decided in three of the eight four-team groups – and even the teams who are currently bottom of their groups could still reach the knockout stage in two of those tables.

Five-time champions Barcelona are the most high-profile club yet to secure their place in the latter stages of the competition, and several sides have the chance to prolong their European season by winning a place in the Europa League play-offs.

It’s beginning to look a lot like Christmas ❄️#UCL pic.twitter.com/1gPy7XudrP

What do teams have to do to qualify for the Champions League Round of 16?

Finish in the top two places in their group. Ajax, Bayern Munich, Liverpool, Manchester City and Manchester United have already done that by securing top place with the luxury of a game to spare, so expect to see those teams make changes and rest players.

Chelsea, Inter Milan, Juventus, Paris Saint-Germain, Real Madrid and Sporting Lisbon are also guaranteed a place in the Round of 16, although they may need a positive result on the final matchday to finish top of the table.

In Chelsea’s case, that means they will almost certainly need to win in St. Petersburg, as Juventus are at home to winless Malmo, who are already out.

The most successful team in Champions League history, 13-time winners Real Madrid, must ensure they do not lose when Inter Milan visit the Bernabeu if they are to top Group D.

Barcelona face the daunting task of traveling to Bayern Munich – winners of five out of five in the competition so far this season – in new manager Xavi’s second Champions League match in charge.

Any slip-up could let in Benfica, who are two points behind them and have a seemingly much easier task against Dynamo Kiev, who are already out courtesy of gaining a solitary point from their campaign so far.

👋 Munich… Here we are! pic.twitter.com/Txs0YFcm0t

There’s another straight shoot-out behind Manchester United in Group F, where Atalanta must win at home to Villarreal to stop the Spanish side progressing at their expense.

Just a point separates the three teams vying for qualification in Group B (Porto, AC Milan and Atletico Madrid) and Group G, where fourth-placed Wolfsburg could conceivably finish top with victory at home to Lille, who themselves start in first place but only three points clear of the French club.

This season, the teams who finish third will proceed to play-offs against teams finishing second in the Europa League for a place in the knockout stage of that competition.

That could include former winners such as Milan, Porto or Barcelona or an established heavyweight in the form of Atletico. Even before the departure of Lionel Messi, the feasibility of Barca playing in the Europa League had been seen as a sign of their downfall from the days when they were regularly Champions League winners.

Teams who join the play-offs will be seeded and have the advantage of playing the second leg at home, which should provide a stiff test for Zenit, who are guaranteed to be in the draw.

Moldova’s first ever Champions League group stage entrants, Sheriff, and Bundesliga contenders Borussia Dortmund – spearheaded by prolific forward Erling Haaland – are also already guaranteed to join the play-offs. Real Betis and Rangers are the Europa League sides they know they could meet ahead of the decisive week of fixtures.

Which Champions League group stage games are worth looking out for on the final Matchday?

You never know in the unpredictable Champions League, but purists might enjoy watching Paris play their final group game at home to Club Brugge or Manchester City simultaneously travel to Leipzig at 6.45pm CET on Tuesday.

Madrid and Inter duke it out for top spot in their group at 9pm on the same night. Group B could offer the games to watch on the first night, though: Atletico must win at Porto – who start in second – to have a chance of qualifying, while a win for Milan at home to Liverpool would give them a strong chance of claiming second spot.

Describe his career since in 1 word… pic.twitter.com/oLj4LzOx2l

Zenit host Romelu Lukaku, Kai Havertz and friends in one of two early kick-offs in Group H on Wednesday. Barcelona will try to keep their two-point advantage over Benfica against Bayern later that evening, when there will also be all to play for in the two Group G games.

The draw for the Champions League Round of 16 takes place at UEFA headquarters on Monday 13 December at 12pm CET, with the draw for the Europa League play-offs afterwards.

Zenit will feature in the Europa League play-offs. The first legs are scheduled for 17 February, followed by the return fixtures a week later.

Joe Biden expected to take up a tough stance against China