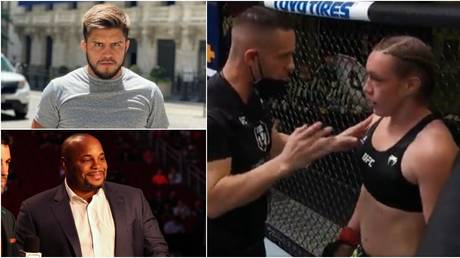 Former two-weight UFC kings Daniel Cormier and Henry Cejudo have come to the defense of coach Jim West, who was accused of “abusing” his fighter Aspen Ladd with some straight-talking advice during her defeat on Saturday night.

West was forced to apologize in a public message after a backlash over his remarks during Ladd’s unanimous decision defeat to Norma Dumont in their featherweight main event in Las Vegas.

The increasingly frustrated coach was heard telling Ladd in no uncertain terms that she was behind on the scorecards after the opening three rounds, stating “please tell me what you are doing” and demanding more urgency.

Among those to rip into West was women’s MMA icon Miesha Tate, who labelled his methods “abuse” and branded him a “douche.”

This is ABUSE, what a douche

Taking flak, West later issued an apology on social media to Ladd, with whom is also said to be in a relationship.

“Yes after the first couple rounds I may have been a little harsh but I know Aspen and at that time technical conversation was not in the cards being down 3 rounds,” wrote the MMA Gold coach.

“Nonetheless I own it and I am sorry to [Aspen Ladd] from the bottom of my heart, I will continue to be better each time.”

However, some stepped in to defend the coach, claiming his methods were nothing out of the ordinary and that there would be no such furor if he had been speaking to a male fighter.

And after BT Sport released more complete footage of the exchanges from Ladd’s corner in-between rounds on Saturday, the picture appeared to offer a more balanced assessment of what West had been saying to his fighter.

“Please tell me what you’re doing.”

Listen in on what was said by Aspen Ladd’s corner during her loss to Norma Dumont at #UFCVegas40.

What did you make of it? pic.twitter.com/V9dQZSWoHK

Among those to pick up on the footage was former two-weight champion Cormier.

“This is the greatest defense of a coach I’ve seen in a long time,” said the retired light-heavyweight and heavyweight star.

“Watching this video you see how Coach started, got frustrated, got his fighter to win a round and maybe two.

“If we live in a world where this is bad then I don’t know. No sorry needed!”

Fellow former two-weight champion Cejudo concurred, writing in the comments: “I love when coaches get real. We live in a soft world.”

I love when coaches get real. We live in a soft world.

“If this trainer was talking to a male fighter this way there would be no f*cking issues,” read one popular response from a fan.

“It’s actually pretty patronizing to the toughness of women to think this was over the top ridicule from a coach.”

The defeat was only Ladd’s second in her 11-fight professional MMA career and capped a disappointing couple of weeks for the Californian fighter.

The 26-year-old was forced out of a bantamweight match-up with Macy Chiasson earlier in October when she failed to make weight and was seen shaking disturbingly on the scales.

‘This is insanity’: UFC star Ladd shakes violently on scales at weigh-in before fight canceled amid widespread concern (VIDEO)

Ladd later put the incident down to the unexpected onset of her menstrual cycle, although some including former UFC champion Tate attacked her online and accused her of trying to cheat.

The bout was scrapped but Ladd when then offered a shot at redemption when she stepped in at 145lbs to meet Dumont after the Brazilian’s original opponent Holly Holm was forced out with a knee injury.

Returning to the Octagon for the first time in almost two years, Ladd and her team were left disappointed as Dumont utilized her jab to lock down the win and more herself further into featherweight title contention.

“Not my night. Congrats to my opponent. We will be back better,” said Ladd afterwards.

“In the meantime I finally got to get back in there after nearly 2 years.

“Now it’s time to take a step back, take a breath, and get back to fighting and feeling like myself again. On to the next.”

Dumont, meanwhile, has called for an interim featherweight title bout with Holm, with the winner taking on divisional queen and two-weight champion Amanda Nunes.

‘The Lioness’ last defender her belt against Mega Anderson back in March but is next in action at bantamweight against Julianna Pena at UFC 269 in December.

Here’s how to get into shape post-pregnancy