A Tiger on Our Turf 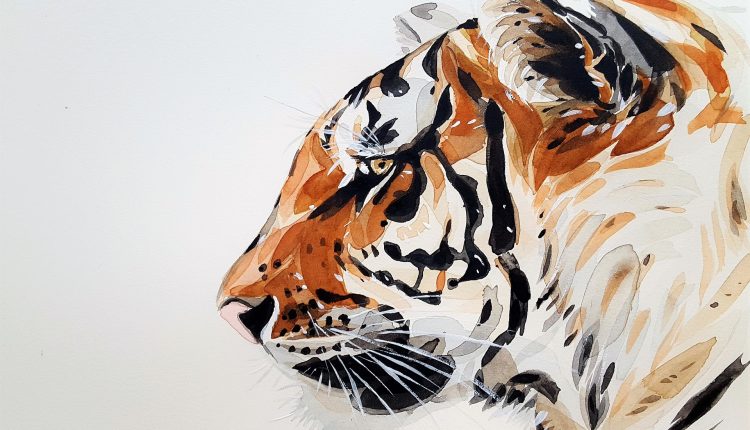 An ageing, wounded tiger, now named T23, has in the past few weeks killed four people and several cattle on the edge of the Mudumalai sanctuary.
Harassed forest department officials have been desperately patrolling the area where the tiger was last sighted, in an effort to sedate it with a tranquilliser.
The decision to tranquilise, capture and relocate this tiger was not made lightly, yet urban wildlifers will pontificate on the cruelty of doing so.

A tiger is a magnificent being. No two ways about it. Living on the edge of the Mudumalai sanctuary, I have heard its unmistakable, unforgettable ferocious sound, filling the valley with its reverberating roar, making animals and humans alike quake. It’s a weird feeling because even though the tiger’s roar fills you with excitement and wonder, it sends a shiver down your spine as well.

I am desolate because in spite of living here for 38 years, I remain one of the luckless few to have never caught a glimpse of a tiger in the wild.

The past week has seen locals, generally rather proud of their personal connection to visiting elephants and leopards, in quite a fury. This is unusual, but perfectly understandable. An ageing, wounded tiger, now named T23, has in the past few weeks killed four people and several cattle.

Harassed forest department officials have been desperately patrolling the area where the tiger was last sighted, in an effort to sedate it with a tranquilliser. This operation is not an easy one. Animals are tranquillised by a stun-gun that sends a dart into the creature, not a bullet. The shooter has to get fairly close to the animal for a reasonably fair shot. Again, easier said than done. The thick fur coat of a tiger is not easily penetrated. And the Tamil Nadu forest department is not allotted an adequate budget for the complicated wildlife operations it often has to carry out.

Their Kerala counterparts, on the other hand, have better equipment, better training and better protective gear to deal with dangerous, tricky situations. Apparently they regularly and quietly catch predators.

With three cows dead, the predatory tiger will not be allowed to roam freely. It will be taken into the deep forest, away from populated regions, and released there.

Since sanctuaries in general, and the Mudumalai wildlife sanctuary in particular, are surrounded by human settlements, it’s inevitable that serious confrontations occur. Cows are carried away, as are livestock of any kind including sheep, goats, chicken and guinea fowl. We personally had our beautiful, beloved Alsatian carried away by a marauding leopard. I hated that leopard with a passion for years.

Now, I wouldn’t dream of comparing the worth of a goat or even a cow to a tiger or leopard. But to a sharecropper whose livelihood depends on that single crop or cow, it’s a tragedy. He may have pawned his wife’s meagre wedding jewellery to sustain his family. A poor farmer can be financially wiped out by the loss of a cow. So the anger is frequently palpable.

Way back in the mid-eighties, I heard about an elephant killed by poachers close to where we lived. Everyone was making the mandatory pilgrimage there. Naturally, I wanted to write a story about it. My husband dissuaded me. I was pregnant with our second child, now an avid conservation enthusiast.

“It’s such a vile, horrendous, mind-numbing scene,” he said. “You’d definitely retch violently at the sight, maybe even lose the baby.”

The poachers had shot the elephant, then used huge knives to gouge out the tusks, shredding the trunk and face of the poor animal. A gory, nightmarish, fiendish sight. The hapless elephant had over 30 old bullet wounds in it from people, poachers and farmers, who’d taken pot-shots at it. So it had died an angry, injured, suffering animal.

Also read: In a Country That Worshipped Tigers, Whence the Idea of ‘Man-Eater’?

In the 35 years since, poaching has thankfully been hugely curbed. But better training and equipment is a must for all the anti-poaching teams, guards and watchers who patrol the area relentlessly, with minimal protective gear, putting their lives on the line.

Urban armchair wildlife enthusiasts tend to sit in judgement. No doubt it seems tragic to kill a tiger, however old, wounded, sick and dangerous. But after weeks of tracking it in an attempt to tranquillise and treat it, the decision has been made. It was not made lightly. The current district forest officer, the chief wildlife warden and the field director are responsible officers (not always the case) who care about both the animals and the people.

The three men and one woman killed by the tiger were poor folk herding their cattle. But few people worry about them. They were fathers, brothers and husbands. The woman was a wife, mother, sister. Their families depended on them. Naturally, Gudalur and Masinagudi residents are outraged, livid and protesting. They want the tiger shot before it claims a fifth victim.

The field director and his team have tried for over a week to tranquillise and capture the animal. The chances of an old, wounded tiger surviving in the wild are slim. Young male tigers routinely kill older rivals. They mark their territory and guard it fiercely. Yet urban wildlifers will pontificate on the cruelty of shooting this tiger. The field director will be judged no matter what the decision, if the tiger is shot.

T23’s days are numbered because that is the nature of tigers. A younger male, jealously guards its turf. It will not countenance a rival, however old and feeble.

The senior forest officers are still desperately trying to capture and relocate T23. Everyone hopes they will succeed. There is an aura surrounding this utterly magnificent beast, which makes killing it unconscionable, unbearable, no matter what. But when a tiger begins to eat its human prey, which has happened with the last victim, it has to be stopped. Efficiently and quickly.

Like most others here, we will be sad to hear of the death of the tiger if it is not captured alive. But life must go on. For better or worse.

Mari Marcel Thekaekara is an independent writer who has focused on social issues in magazines and newspapers.

The post A Tiger on Our Turf appeared first on The Wire Science.

Big B committed to awareness about head injury, Hepatitis

Pakistan attempts to mend its relationship with Saudi Arabia