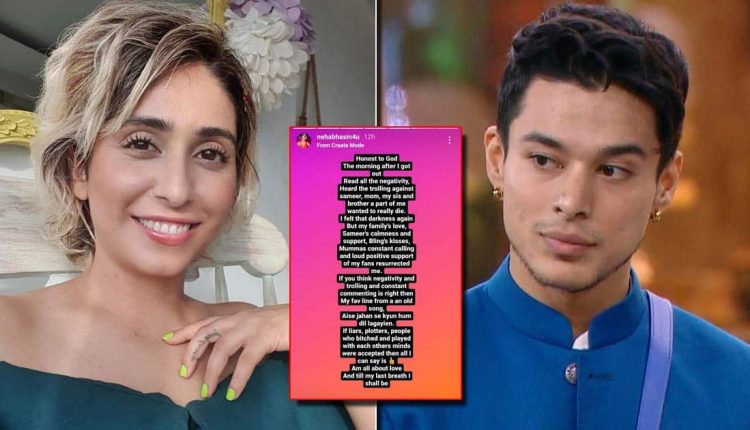 Bigg Boss OTT finally found its winner last Saturday and Divya Agarwal took home the prestigious trophy. However, like every year, contestants have to now deal with online trolls and haters. Similarly, Neha Bhasin who was eliminated just 3 days before the finale was shocked when she came as netizens were trolling her family and husband.

The Dhunki singer was one of the entertaining contestants of the show and was questioned a lot about her closeness with Pratik Sehajpal.

The singer shared her emotional post where she opened up about how much she was affected by the trolls, Neha Bhasin wrote, “Honest to god the morning after I got out read all the negativity, heard the trolling against Sameer, mom, my sis and brother a part of me wanted to really die. But my family’s love, Sameer’s calmness and support, Bling’s kisses, mumma’s constant calling and loud positive support of my fans resurrected me. If you think negativity and trolling and constant commenting is right then, my favourite line from an old song, Aise jahan se kyun hum dil lagayein. If liars, plotters, people who bitched and played with each other’s minds were accepted then all I can say is. Am all about love and till my last breath I shall be.”

Meanwhile, Pratik Sehajpal too shared a post where he advised his followers and trollers to not target the singer and wrote, “Guys I have one request to all of you who love me and support me. Please don’t say anything wrong to Neha. Don’t blame her because I was also equally involved in everything and I accept it but she has been a true and honest friend for me and has unconditionally and honestly stood up for me and that means a lot to me. It was a pure and true friendship and true emotions were involved. Please usko kuchh bhi mat bolo and ya toh mujhe bhi bolo. I respect her and I am thankful to her for always being there for me and main bhi uske liye honest tha. Please one request guys. She’s a great friend and a great woman. She’s an inspiration and I will always respect and have that gratitude in my heart for her! Thank you @nehabhasin4u.”

The two started getting backlash after the former Splitsvilla contestant broke his bond with Akshara Singh to form a connection with Neha Bhasin, since then both the contestants were constantly in news.

Meanwhile, Pratik Sehajpal became the first confirmed contestant of Bigg Boss 15 and the model is currently under quarantine. The controversial show hosted by Salman Khan will be back from 2nd October.

“Shehnaaz Gill Is Not In A Good Frame Right Now,” Pavitra Punia Shares As She Talks About Sidharth Shukla’s Death

Suriya Gets Emotional Over His 24-Year Journey In The…

Amarinder Singh says his new party will contest all 117…