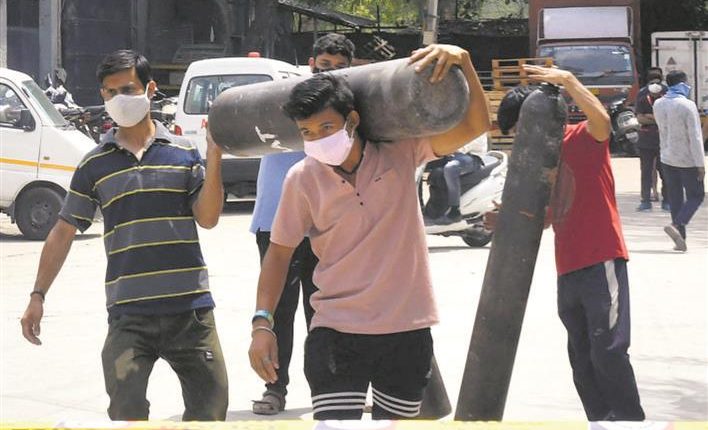 A Supreme Court-appointed panel has indicted the Delhi Government for allegedly inflating the oxygen requirement by four times during peak of the second wave of Covid-19 pandemic, thus adversely affecting the supply to 12 other states.

1,140 MT of oxygen was demanded by the Delhi Government during the peak of second wave

289 MT was the actual need, as per the formula based on bed capacity, the panel said

The panel, a sub-group set up by the top court on May 6 to audit oxygen consumption in Delhi hospitals, concluded that the Kejriwal government “exaggerated” the consumption figure to claim 1,140 MT of oxygen. This was four times the figure (289 MT) calculated using the formula based on bed capacity.

The AAP and BJP clashed on Friday over the audit report. After the BJP accused the AAP government of playing politics, the AAP trashed the allegations

In its interim report to the SC, the five-member panel, led by AIIMS Director Randeep Guleria, said, “There was a gross discrepancy (about four times). The actual oxygen consumption claimed by the Delhi Government (1,140 MT) was about four times higher than the calculated consumption as per the formula based on bed capacity (289 MT).”

It said the Delhi Government demanded 700 MT of oxygen on April 30 using a “wrong formula”.

Overruling the Centre’s contention that experts have pegged Delhi’s requirement at 415 MT, a Bench, led by Justice DY Chandrachud, had, on May 5, ordered the Centre to maintain a supply of 700 MT to Delhi, which had sought 900 MT of oxygen for peak caseload of 95,000 patients on May 3. The Delhi HC also pulled up the Centre on the issue.

The Delhi Government had claimed that the oxygen requirement at 183 hospitals was 1,140 MT, but as per information received from the hospitals, the actual consumption was only 209 MT, it noted.

If the Centre-recommended formula for oxygen allotment was adopted, the requirement would have been 289 MT and 391 MT as per the Delhi Government formula, it said.

The panel further said tankers were not able to offload oxygen as tanks at various hospitals in Delhi were completely filled.

Some hospitals could not differentiate between KL (kilo litre) and MT (metric tonne) and the same was not examined while projecting 700 MTs, it said.

Goals on agenda for El Clasico

‘I’m a human being’: Days after revealing her roots in…

Pyongyang’s actions at odds with denuclearization:…