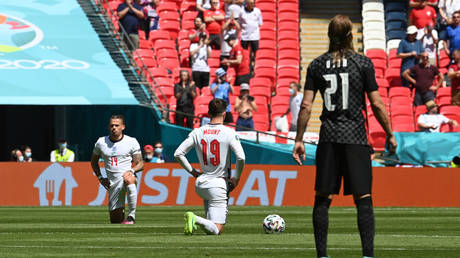 Sections of England supporters defied a pre-match plea from the Football Association and jeered as Three Lions players took a knee before the start of their Euro 2020 game with Croatia at Wembley on Sunday.

Boos and whistles were heard around the stadium before the starting whistle as the England team – led by captain Harry Kane – dropped to one knee while their Croatian counterparts remained standing.

The jeers were soon drowned out by loud cheering from the remainder of the crowd, but were nonetheless picked up on by broadcasters and media inside Wembley.

Hats off to #cro for refusing to join in this ridiculous charade pic.twitter.com/9b9p8Gow6i

Boos drowned out by cheers as England players take a knee.

The continued disdain from some fans for the take a knee gesture – linked to support for Black Lives Matter – came despite the FA earlier issuing a desperate message for supporters to get behind players.

“Major tournaments don’t come around often and when they do, it’s an opportunity to unite friends, family and the country,” the FA had written in a social media post on the eve of the game.

A message to @England supporters: pic.twitter.com/mSRzpTjQ00

“This collective support is what spurs our team on during challenging moments and it gives them the best chance of succeeding.

“As the team has reiterated many times, they will collectively take the knee ahead of their fixtures during the tournament.

“They are doing this as a mechanism of peacefully protesting against discrimination, injustice and inequality.

“This is personally important to the player and the values the team collectively represents.

“This gesture of unity and fighting against inequality can be traced back as far as the 18th century.

“It is not new, and English football has made it very clear that it does not view this as being aligned to a political organisation or ideology.”

‘I’ll be rooting against England then’: Anti-BLM fans pleased by news Croatia will NOT take knee in Euro 2020 clash

Sections of the Three Lions support clearly don’t buy the claims that the gesture is non-political, perhaps unsurprisingly considering how closely linked it has been with the BLM movement – elements of which are radically left-wing.

At Wembley on Saturday, large sections of the 22,000-strong England support were heard cheering in support of the act, indicating the issue remains divisive.

Football’s no longer about crowd-pleasing action, as endless campaigns turn it into an exercise in mind control

England are kicking off their Euro 2020 campaign against rivals who beat them in the World Cup semi-final in Russia three years ago.

After taking on Croatia, Southgate’s team have further Group D home games against Scotland and the Czech Republic at Wembley.

Based on Sunday’s scenes, the FA and others should brace themselves for more defiance from some sections of fans over a gesture which has already been branded performative and ineffectual, even among the most ardent campaigners for racial equality.

Corinthians rise to third in Brazil’s Serie A