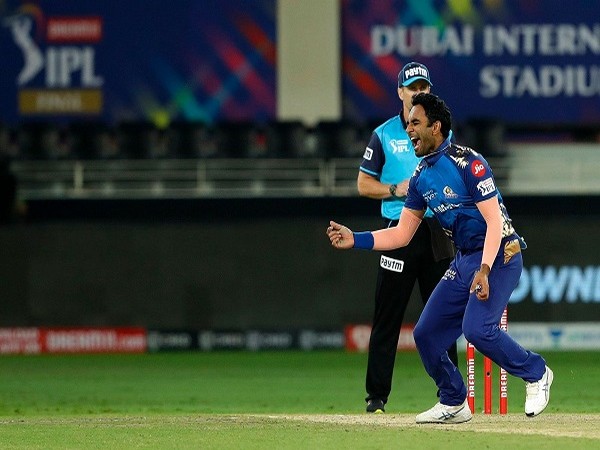 Dubai [UAE], November 10 (ANI): It was a dream start for Mumbai Indians in their sixth final of the Indian Premier League as Trent Boult continued his brilliant show with the new ball to push the Delhi Capitals batsmen against the wall at the Dubai International Cricket Stadium on Tuesday.
The DC score after they won the toss and decided to bat first was 3/22 in the fourth over with Kiwi pacer Boult picking two of them. While Boult finished with figures of 3/30 from his four overs, it was the partnership of 96 for the fourth wicket between DC skipper Shreyas Iyer and Rishabh Pant that saw the first-time finalists finish a defendable 156/7 in their 20 overs.
While Rishabh perished after a 38-ball 56, hitting Nathan Coulter-Nile straight to Hardik Pandya, Iyer finished unbeaten on 65 off 50 balls. Jayant Yadav was the surprise pick for MI and he didn’t disappoint as he picked the wicket of in-form Shikhar Dhawan. The spinner said that was a match-up the MI unit was looking at.
“Felt great. That was the match-up (against Dhawan) we were specifically looking for. There were a lot of left-handers and I played against them initially. The management backed me to the hilt and gave me this opportunity to perform on the grand stage,” he told the host broadcasters during the mid innings break.
Asked about the wicket, Jayant said that slower deliveries would have a big role to play even in the second innings. “The pitch is on the slower side. The outfield is not damp,” he said. (ANI)