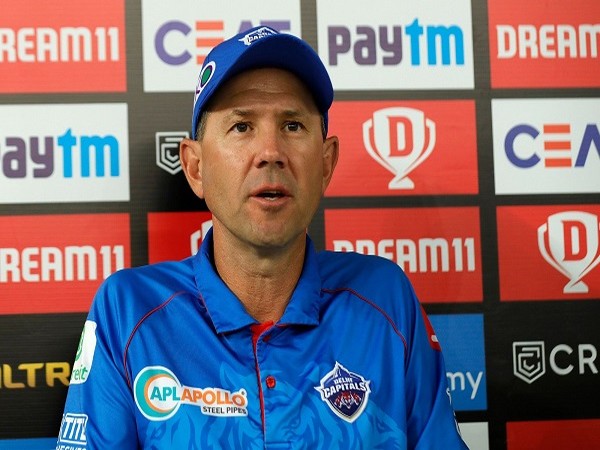 Dubai [UAE], November 3 (ANI): After registering a comprehensive six-wicket win over Royal Challengers Bangalore (RCB), Delhi Capitals’ coach Ricky Ponting said that he was pleased to see how all the players of his side responded in a do-or-die match in the Indian Premier League (IPL).
With this win against RCB, Delhi Capitals qualified for the playoffs and the side will now get two chances to qualify for the finals after finishing second on the points table. Chasing 153, Shikhar Dhawan and Ajinkya Rahane started with the bat for Delhi as both batsmen played knocks of 54 and 60 respectively. Delhi won the match by six wickets with six balls to spare.
“I am most proud because it was do-or-die, and the boys knew that and they responded in a really positive manner. The way I am looking at it now is that we have done that, and we just have two more games to play, and it will gear ourselves up to try and win the first final, then let’s see how we can go from there,” said Ponting in an official Delhi Capitals release.
“It has been the hardest thing (to have lost four matches). I think, over the last couple of weeks, the key was to make sure that the confidence was still up. You know whenever you lose a few games in a row at the back-end of the tournament, it can sometimes be a bit difficult to change the momentum. But, credit to the boys – they were outstanding. You could see different energy around the group that really set the tempo for the whole game,” he added.
Delhi Capitals will now lock horns against Mumbai Indians in Qualifier 1 and the winner of that match will directly progress to the finals of the tournament.
“So we can look ahead now to MI, who have beaten us twice in this tournament, and make sure we are ready to go for them in a few days,” said Ponting.
Delhi Capitals’ skipper Shreyas Iyer said that it is an amazing feeling to qualify for the playoffs and it would be a good challenge to face Mumbai Indians once again in the tournament.
“It’s an amazing feeling to be second on the table, and facing Mumbai Indians again, who have been really dominant throughout the tournament. We’ve got another opportunity to beat them, so I am sure that we will make the best use of it,” expressed Iyer.
“I feel it was a comprehensive victory for us against RCB. I think we really paced our innings very well, especially while chasing. And the way bowlers bowled, I think, irrespective of how the wicket played, it was really amazing bowling. It was phenomenal to see the intensity and the energy that the boys showed on the field. What I require as a captain on the field is to see everybody putting 100% effort, and I believe your attitude and body-language do matter a lot whenever you are on the field,” said Iyer. (ANI)

Helmets must be made mandatory, be it against spinner or pacer: Tendulkar

Bhupathi-Kyrgios knocked out of French Open