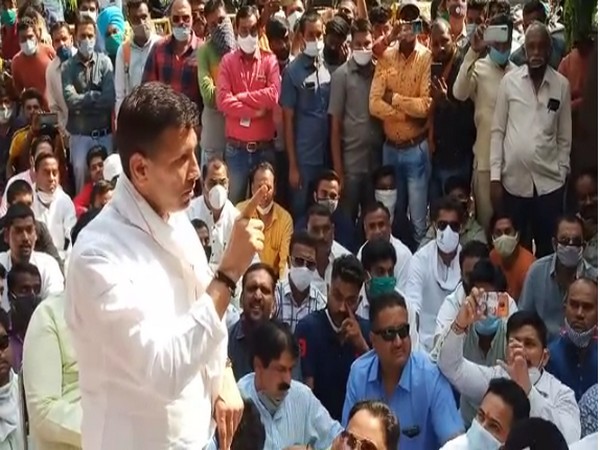 Indore (Madhya Pradesh) [India], October 31 (ANI): Indore Police has registered a case against Congress leader Jitu Patwari and several party leaders including Sanwer Assembly seat candidate Premchand Guddu for allegedly flouting coronavirus norms.
Jitu Patwari along with several other party leaders staged a protest on Thursday against the arrest of Congress worker Babloo Yadav outside the DIG office here.
“On October 28, former minister Jitu Patwari, Premchand Guddu with over 200 people staged a protest outside DIG office. Since Section 144 is already imposed due to coronavirus, so if more than 100 people gather at a place without permission for a programme then it will be deemed as illegal. Many people in the programme were not following social distancing and were not wearing masks,” Sanjay Shukla, station in-charge Gwaltoli police station told reporters here.
“A case has been registered under Section 188 and 269 of the Indian Penal Code and section of 52 Disaster Management Act in the matter against all involved. 21 Congress leaders have been named in the case and other 200 others have also been booked,” he added.
Voting on 28 assembly seats in Madhya Pradesh by-polls will take place on November 3 and the results will be declared on November 10.
Bye-elections are due on 28 seats following the resignation of 25 MLAs and the death of three legislators earlier.
In March this year, 22 Congress MLAs resigned from the state Assembly paving the way for BJP’s Shivraj Singh Chouhan to take over as Madhya Pradesh Chief Minister for the fourth time. (ANI)

Pregnant or postpartum Black women are 45% more likely to…

‘Good Newwz’ to release in Hong Kong on February…

Using alternatives for saliva not in spirit of game: Nitin…

Which ‘hand’ reduced Re 1 of government money to…