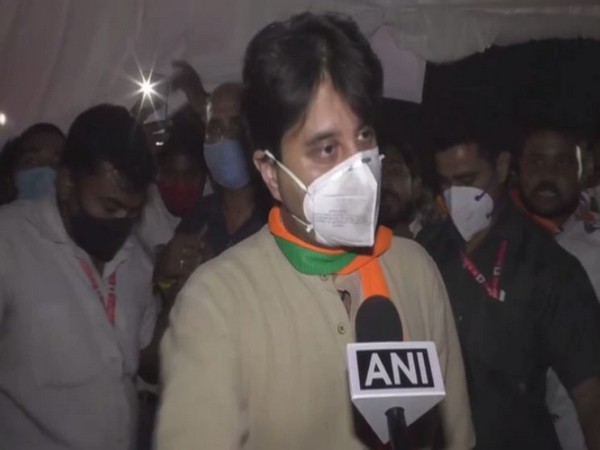 Gwalior (Madhya Pradesh) [India], October 26 (ANI): BJP leader Jyotiraditya Scindia on Monday lashed out at Congress leader Praveen Pathak, asking him to “read history before opening his mouth.”
Speaking to ANI, Scindia said that Congress leaders were habituated to levying allegations and questioned their silence for the entire period when he and his late father were a part of the Congress.
“This is their habit, why were their mouths were closed when my father was in Congress for 30 years. When I was in Congress for 20 years why did they keep quiet then? Read history first before opening your mouth,” Scindia said.
His remarks came after Pathak, according to reports, had accused Scindia family of being traitors.
Meanwhile, Scindia also expressed regret at the deteriorating level of jibes which were being exchanged between politicians in the run-up to the by-polls in MP and blamed former CM Kamal Nath for the same.
I have always said politics should be done at a certain level, the base level to which Kamal Nath and Ajay Singhji have taken it is not just unfortunate but also shameful. After this when his party’s former president (Rahul Gandhi) tells him to apologise, he tells him to go to hell, this is his arrogance and the state’s residents will end it,” Scindia said.
Voting on 28 assembly seats in Madhya Pradesh by-polls will take place on November 3 and the results will be declared on November 10.
By-elections are due on 28 seats following the resignation of 25 MLAs and the death of three legislators earlier. (ANI)

The deadly anniversary that reminds a nation of its…

Suspected fragments of MH 370 found on island near Mauritius