IPL 13: Axar Patel has been ‘great asset’ for us, says Shikhar Dhawan 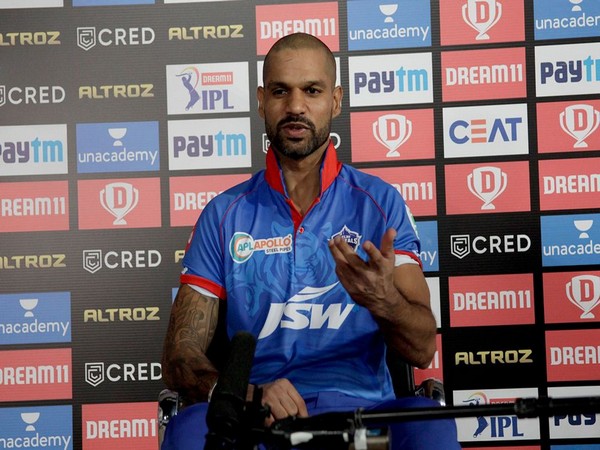 Sharjah [UAE], October 18 (ANI): After registering a thrilling five-wicket win over Chennai Super Kings (CSK), Delhi Capitals’ opening batsman Shikhar Dhawan hailed Axar Patel’s performance with both bat and ball, and he labelled the all-rounder as a “great asset”.
Delhi Capitals (DC) chased down a total of 180 with five wickets in hand and one ball to spare. Shikhar Dhawan scored his maiden century in IPL and he remained unbeaten on 101. With this win, Delhi has now gone to the top of the Indian Premier League (IPL) standings with 14 points from nine games.
Delhi needed 17 runs off the final over, and Axar Patel smashed three sixes in the over bowled by Ravindra Jadeja to hand the Shreyas Iyer-led side a victory.
“We knew that the wicket was slow, when they were batting, we got to know about that. Our plan was to make use of the first six overs, unfortunately, we lost two wickets, we knew we were chasing a big target so we had to score regular boundaries and we all did a great job. 180 was a good score, that’s why the match went till the end, the ball was not coming on to the bat, it was stopping a bit,” said Dhawan during the post-match press conference.
“I was always focussing on my process, I was playing well, I was staying positive and confident, I have a great deal of experience behind me, I was analysing what shots to bring in and especially with experience, I pick and choose what shots to play at what situation. Sam Curran bowled very well in the 19th over, his yorker execution was very good, dew was also there so we took an advantage of that as well. We knew Bravo would not be able to bowl the last over and it would be bowled by Jadeja. We being left-handers, we had a certain advantage against Jadeja,” he added.
Batting first, CSK posted a total of 179/4 in the allotted twenty overs. Faf du Plessis (58) and Ambati Rayudu (45*) starred with the bat for the MS Dhoni-led side.
In the end, Ravindra Jadeja also played a cameo of 33 runs off just 13 balls to take CSK’s total past the 170-run mark. For Delhi Capitals, Anrich Nortje was the pick of the bowlers as he returned with figures of 2-44 from his four overs.
Axar Patel returned with the figures of 0-23 from his four overs. Talking about Axar, Dhawan said: “Axar Patel has been a great asset, whenever we demand good overs from him, he does the job, he is normally very economical, having a quality all-rounder makes a big difference.”
“It is a great feeling, the best thing is that we are playing very good cricket, everyone is doing their job and it is a great sign for us, we all stay hungry and we make sure that we focus on the process, we guys make sure that we stay fresh as well and not overdo things in practice,” he added.
CSK will next take on Rajasthan Royals on Monday, October 19 while Delhi Capitals will lock horns with Kings XI Punjab on Tuesday, October 20. (ANI)

IPL 13: Bravo has suffered right-groin injury, his situation will be reassessed, says Fleming

BJP will be taught a lesson in 2019: Akhilesh