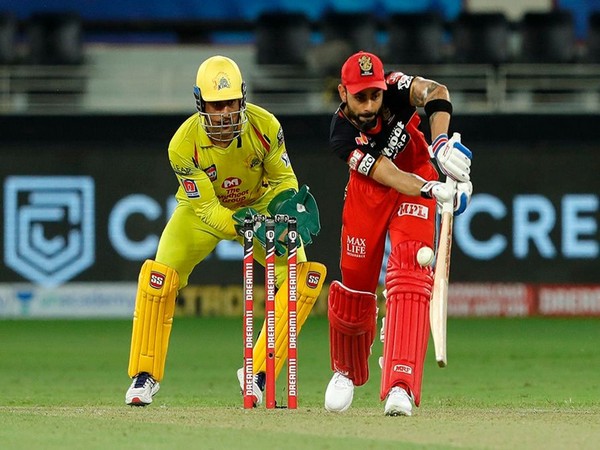 Dubai [UAE], October 10 (ANI): A late onslaught by skipper Virat Kohli powered Royal Challengers Bangalore (RCB) to post 169 runs against Chennai Super Kings (CSK) in their allotted 20 overs at Dubai International Stadium here on Saturday.
After witnessing a sluggish start, Kohli and Shivam Dube scored 14 runs in the 17th and 19th over respectively. In the 18th over, Kohli wreaked havoc and smashed 24 runs.
Kohli started the final over by skipping across the stumps and flicking the ball behind square leg for four. Running between the wickets was at best as Kohli and Dube ran four doubles in the final over.
After opting to bat first, RCB got off to a bad start with opener Aaron Finch back in the dugout in the third over. Skipper Virat Kohli then joined Devdutt Padikkal and duo build a 54-run stand to revamp the innings. Padikkal played beautiful shots but scored runs at a run a ball.
Shardul Thakur ended Padikkal’s stint at the crease in the 11th over. Three balls later Shardul scalped AB de Villiers wicket to dent RCB’s hopes.
Washington Sundar, who was promoted up the order, failed to leave a mark and edged the ball behind to MS Dhoni as RCB got reduced to 93/4 in the 15th over.
Meanwhile, Kohli played cautiously and smashed his 38th half-century in IPL as RCB accelerated in the death overs. Shivam Dube too joined the party and smashed the much-needed boundaries.
For CSK, Shardul picked two while Sam Curran and Deepak Chahar scalped a wicket each.
Brief score: RCB 169/4 [Virat Kohli 90(52), Shivam Dube 22(14), Shardul Thakur 2-40, Deepak Chahar 1-10] (ANI)

Hope Pak-occupied Kashmir will become part of India by 2024:…