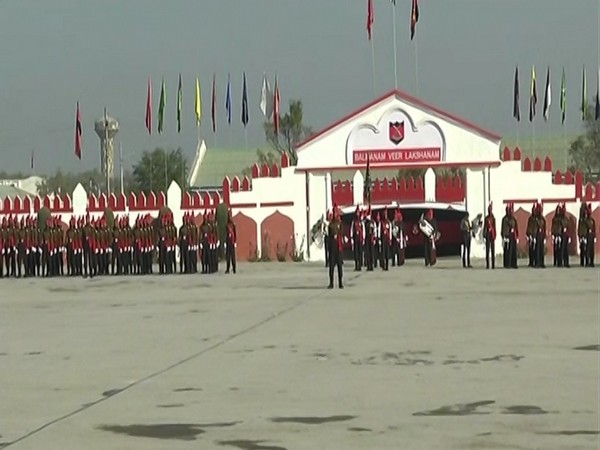 Srinagar (Jammu and Kashmir) [India], October 10 (ANI): The Jammu and Kashmir Light Infantry Regimental Centre on Saturday showcased its latest batch of 301 passing out young soldiers from the Union Territories of Jammu and Kashmir, and Ladakh.
Recruit Course Serial number 122, on having completed one year of strenuous training, was attested on October 10, 2020, at a glittering parade at the Bana Singh Parade Ground of Jammu and Kashmir Light Infantry Regimental Centre.
The attestation parade, depicting the graduation of a recruit and his transformation into a young soldier, was reviewed by Lt Gen BS Raju, Chinar Corps Commander. The young soldiers of the Regiment, hailing from all regions and religions of the Union Territories of Jammu and Kashmir and Ladakh, marched in precise unison, singing their Regimental Song.
Balidanam Veer Lakshanam, the slogan of the Jammu and Kashmir Light Infantry, inspired one and all as the soldiers’ voice echoed in the Kashmir Valley. Their salute to the tri-colour with the National Anthem playing inspired patriotic fervor amongst all present during the parade.
Lt Gen BS Raju congratulated the young soldiers for their immaculate parade and impressed upon selfless service towards the nation. He complimented them for completion of a tough training regimen to become a soldier.
He also emphasized on the importance of imbibing high personal values in order to discharge the duties of an Indian Amy soldier. The Chinar Corps Commander stressed upon all the young soldiers about the immense responsibility which now rests on their shoulders towards their nation, parents and society.
Lt Gen Raju also took the opportunity to address all present and asked them to come forth and help our youth who have gone astray to return back to the mainstream. The young soldiers who excelled themselves in varied facets of training were also felicitated by the reviewing officer. (ANI)

IPL 13: Delhi Capitals up for any kind of challenge thrown at them, says Vijay Dahiya

Law and order has broken down under Modi: CPI-M

Ukraine dismisses its promise to US

Kafeel Khan on the heartbreaking night the hospital in…