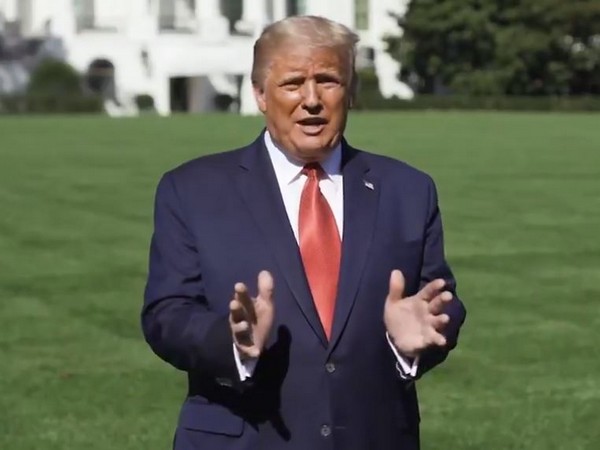 Washington [US], October 9 (ANI): The bewildering tweets and video message sent by US President Donald Trump during his treatment for COVID-19 infection has left the world wondering if the talks are due to steroids being given to him.
According to an article titled ‘A Doctor Weighs In on What Steroids Might Be Doing to Trump’s Brain’ by Shannon Palus published in Slate, Trump, who was given dexamethasone during his stay in Walter Reeds hospital, had tweeted in capital letters “SPACE FORCE. VOTE!” Few days later he removed a stimulus bill, spread misinformation about the virus and also declared that the experimental drug administered to him had cured him. Later, he also issued a video message addressed to ‘TO MY FAVORITE PEOPLE IN THE WORLD!’
Slate quoted Trump as saying, “I went into the hospital a week ago, I was very sick.” He further said that he wants everyone to have “the same care that I got,” for free.
As such bewildering statements has left the world amazed, Palus interviewed physician Esther Choo on the side effects of steroids and if that might be impacting Trump’s brain.
Speaking on the news of Trump taking steroids, Choo said, “the first thought at that point was that he definitely has COVID lung disease, has been hypoxic [has low oxygen levels] for sure, and is probably sicker than we thought. And if you remember, that was the third medication that dropped, over, I think, a two or three day period. So it just had this feeling of an escalating and aggressive treatment course.”
The physician further said that the steroids can interfere with a person’s immune system like cause mental effects or even make blood sugar go wrong.
“People without anxiety can feel those symptoms newly. And you can be totally manic. You can feel hyperactive and you can feel a different drive to do things and you just cannot stop. It can really amp you up, which is part of the reason you feel so great, and people can feel really euphoric. The one time I was on steroids, I cleaned out every drawer in my house every night. I could not stop moving,” Esther said.
Replying to the question “How confident would you be in saying that what we’re seeing from Donald Trump saying that he’s feeling better, saying that he wants everybody to be getting this antibody cocktail that he’s on–does that seem like very clearly the side effects of steroids to you?”, Esther said “No, it’s not absolutely clear. Some of the grandiosity is just him.”
“Anytime he’s doing a Twitter storm in all caps, it looks a little manic. I think that it’s so part of who he is intermittently that it’s really hard to tell if it’s more of him because of the steroids. Also, the context is so unusual. He’s on all these medications, he’s on that monoclonal antibody cocktail that we don’t even know the side effects to, because it hasn’t been well studied. Then he’s on the Remdesivir, which is really a brand new medication in the context of COVID, which itself can cause alterations to your brain and your behaviour. And then add on the steroids. It’s just very hard to parse out in the context of lots of different things happening and having a potential effect on his brain right now,” the physician added.
As the effects cocktail of medications is not known yet, Esther told Palus that President Trump has become a “presidential guinea pig.” (ANI)

Scientists use blood test to predict who is likely to…

Celebrities on ramp for Cancer patients