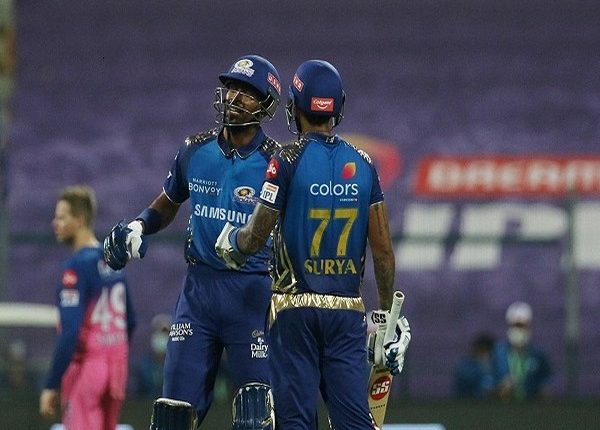 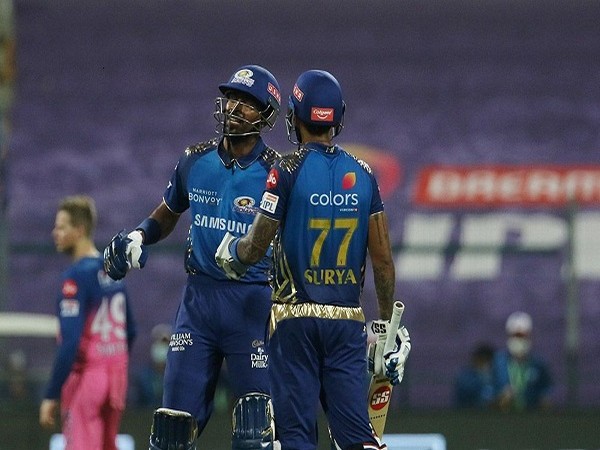 Abu Dhabi [UAE], October 6 (ANI): Mumbai Indians’ young brigade has continued to impress in the 13th edition of the Indian Premier League, and on Tuesday it was Suryakumar Yadav who took the attack to the Rajasthan Royals bowlers in Abu Dhabi as MI put 193 runs on the board in their 20 overs.
Suryakumar hit an unbeaten 79 off 47 balls and added 76 runs for the fifth wicket with Hardik Pandya.
Hardik himself hit an unbeaten 30 off just 19 balls and said that Mumbai Indians should be happy with the score they put on the board even as some felt that Kieron Pollard coming in could have added a few more to the total.
“To be honest, we should be happy with the score. Didn’t think we would get this much when we lost a couple of quick wickets, but SKY played a fine innings — just showed the courage (after being hit on the helmet), shows the character in the team,” he said.
Suryakumar was hit on the head by a Jofra Archer bouncer as the batsman had looked to move inside the crease and hit the pacer from outside off into the square-leg region. The extra pace got the better of Suryakumar and the ball crashed into his helmet. Luckily, the blow was absorbed by the helmet and the batsman resumed his innings after being checked on by the physio.
Asked about the young brigade doing well, Hardik said that the team has players who can get the job done and love the responsibility that comes with being part of the team.
“We have players who can get the job done any day, we do talk about it, everyone will take responsibility,” he said.
The dew has so far played a big role in the second innings of the evening games, but Hardik said he was not too sure about it and would need to see once they take the field. “Don’t know about dew, I need to step out and have a look,” he said. (ANI)

BJP may write to EC on use of PM Modi’s photograph in Bihar polls: Sushil Modi

Gandhi Jayanti 2022: Performers who brought Gandhi and his ideals to life

Google is closing ‘This’ service from February…