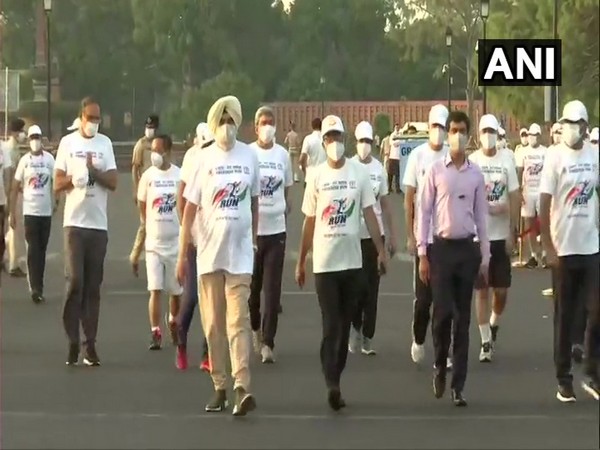 New Delhi [India], October 1 (ANI): Central Reserve Police Force (CRPF) organised a run/walk event at Rajpath to mark the completion of the one crore km run targeted by the force between August 15 and October 2 under Fit India Freedom Run.
The event was flagged-off by the first-ever athlete to receive an Arjuna Award in 1961, GS Randhawa, Padma Shri Commandant (Retd), CRPF. Force personnel including DG CRPF Anand Prakash Maheshwari participated in the run.
Olympic medallist wrestler Sushil Kumar, Indian sportswoman Kunjurani Devi, and Arjuna Awardee Paramjeet Singh also participated in the run/walk.
“Sports Ministry organised the Fit India Freedom Run from August 15 to October 2, CRPF participated in this event. Today is the culmination day of this event. We were given the one crore kilemetre target and I’m pleased to annouce that we have succeeded the target. CRPF with the local communities organising these runs in the safe environment in the country,” CRPF DG Anand Prakash Maheshwari told reporters.
“This is a very good initiative by the Sports Ministry. I’m happy that my organisation is conducting this event and they called me to flag-off the run. I think the results will be very helpful,” GS Randhawa said.
Organised by the Sports Ministry, the run is the largest in the country that was launched on August 14 by the Union Minister of Sports and Youth Affairs Kiren Rijiju. The run, to go on till October 2, has been lapped up by sportspersons and non-sportspersons from all spheres and has seen major reception. (ANI)

Fire at plastic factory in Delhi, no injuries

Vaani Kapoor snaps a selfie with the ‘one & only Shamshera’ Ranbir Kapoor; See happy photo

EXCLUSIVE: For the first time in my life I got a bound script, says Sonali Bendre on OTT debut

201st Meeting of the Medical Society of Kings, NY

Irrfan Khan’s son Babil says late actor ‘would be nothing’…