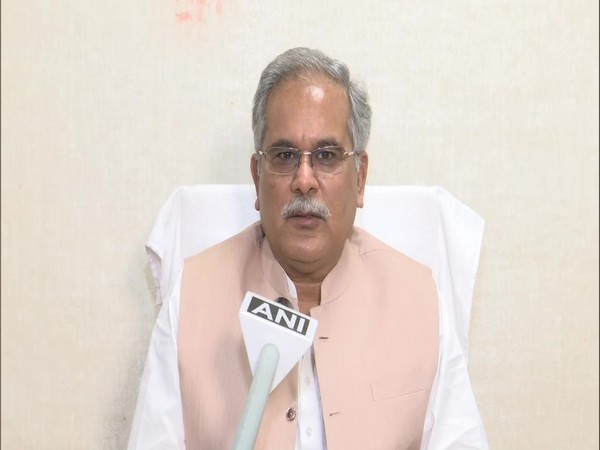 Raipur (Chhattisgarh) [India], September 26 (ANI): Chhattisgarh Chief Minister Bhupesh Baghel on Friday transferred online Rs 8,02,00,000 to the accounts of 83,809 dung sellers as the fourth installment of payment under the Godhan Nyaya Yojana.
The payment was done for the 4,01,475 quintals of cow dung procured in 3,122 gauthans of the state between September 1 and September 15. Till date, a total of Rs 20,72,00,000 has been paid under this scheme. This scheme is largely benefitting the poor, landless and cattle owners, according to a statement issued by the Chhattisgarh Chief Minister’s Office.
On the occasion, Baghel said in his address said that the state government is living up to its commitment of protecting the interests of farmers, poor people and labourers. “Fulfilling right from loan waiver to paddy procurement, irrigation tax waiver to halving the electricity bills, and launching various innovative schemes for farmers and poor people of the state, the government has kept all its promises,” he said.
Through Rajiv Gandhi Kisan Yojana and Godhan Nyay Yojana, the state government is making consistent efforts to improve the financial condition of people in rural areas, he added.
The Chief Minister further hit out at the Centre over recently passed farms bills by the Parliament, saying that these three laws are “not in the larger interest of farmers” and common people as these would “adversely affect” the livelihood of farmers, agricultural labourers and common people. “Hoarding, contract farming and private mandi system will only cause harm,” he said.
During the recently concluded monsoon session of Parliament, the two Houses passed Farmer’s Produce Trade and Commerce (Promotion and Facilitation) Bill, 2020 and Farmers (Empowerment and Protection) Agreement of Price Assurance and Farm Services Bill, 2020.
A bill to amend the Essential Commodities Act was also passed. (ANI)

Japan determined to host Tokyo Olympics in 2021 to prove humanity’s win over COVID-19: Suga at UNGA