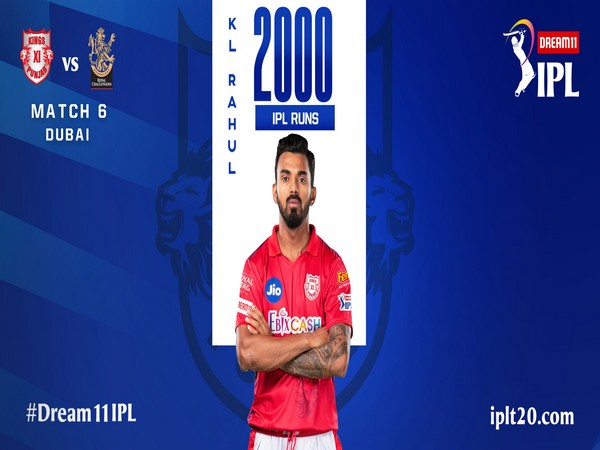 Dubai [UAE], September 24 (ANI): Kings XI Punjab’s (KXIP) skipper KL Rahul on Thursday became the fastest Indian to complete 2,000 runs in the Indian Premier League (IPL).
Rahul achieved the feat during the team’s clash against Royal Challengers Bangalore (RCB). Touching the number in his 60th innings, he broke the record previously held by former cricketer Sachin Tendulkar.
“2000 IPL runs for @klrahul11,” IPL’s official Twitter handle wrote.
Overall, Chris Gayle tops the chart of scoring the fastest 2,000 runs in the league, reaching the figure in his 48th innings.
The skipper needed just two runs when he came out to open the innings for his team.
Earlier, RCB won the toss and elected to bowl first against KXIP in their second game, being played at Dubai International Stadium.
Virat Kohli-led side won their first encounter against SunRisers Hyderabad by 10 runs while KXIP lost the thrilling Super Over finish against Delhi Capitals on Sunday.
Rahul made two changes in the team as they brought in Jimmy Neeshan and M Ashwin in place of Krishnappa Gowtham and Chris Jordan. On the other hand, Kohli retained his winning combination and opted for the same unit that played the last game.
After the completion of six overs, KXIP were playing at 50/0. (ANI)