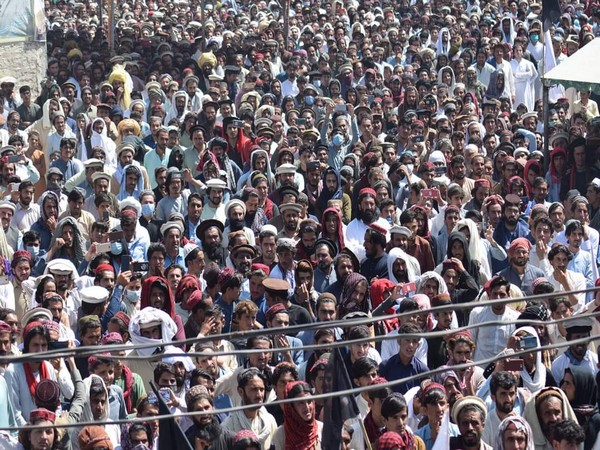 South Waziristan, [Pakistan] (ANI) September 21 (ANI): A large number of Pashtuns joined a protest rally in Wana in South Waziristan to condemn the ongoing unrest, target killings and regrouping of terrorists in Pakistan’s Khyber Pakhtunkhwa province on Sunday.
The rally was joined by Pashtun Tahafuz Movement (PTM) leader Manzoor Pashteen, who said that they fear the increased tormenting of civilians in the aftermath of attacks on security forces and through militant attacks is once again turning Waziristan into a battleground.
There are also reports that many PTM activists were later arrested and tortured by security agencies in the wake of massive anti-government protests.
In a tweet Ubaid Khan Salarzai, a Pashtun nationalist leader said, “The people of Waziristan have gathered there in Wana against the ongoing unrest, target killings and regrouping terrorists, so many people against the oppression of the state during this period of inflation are proof that PTM is correct. @ManzoorPashteen #PashtunLongMarch2Wana”
Aima Khan, a Pashtun human rights activist tweeted, “PTM jalsa in Wana today blacked out by channels, then all quiet. Well done @ManzoorPashteen for giving voice to Pushtun grievances fearlessly. Words uttered with conviction more powerful than guns & bullets, #PTMWanaJalsa #PashtunLongMarch2Wana”.
Gulalai Ismail, an exiled Pashtun human rights activist tweeted a video of the protest and said, “Thousands of people demanding peace and a truth and reconciliation commission for the war-torn Pakhtunkhwa”.
Aziz Wazir, a human rights activist tweeted, “We will continue to demand our rights, we will resist state terrorists whether they are generals or Taliban, we will resist anytime, anywhere & in every forum#PTMWanaJalsa @ManzoorPashteen”
The Pashtuns are facing genocide in the hands of the Pakistan army as a large number of civilians are killed and many are victims of enforced disappearances. They allege that Pashtuns are becoming victims in the hands of the Pakistan army and the terrorists in the region.
The protesters also blamed the Pakistan army and the Taliban for laying down landmines in the area, which is causing severe damage to the locals.
The massive anti-government protest rally was organised amid the Covid-19 pandemic as the people in Khyber Pakhtunkhwa have been suffering immensely for the past several years. (ANI)

Assembly Polls 2022: Rocked by defections in Goa, Congress candidates made to take…

Naga Chaitanya & Nagarjuna on how ‘nasty’ reports affect them:…

Pragya Jaiswal gets candid about being dropped from Salman Khan’s film Antim:…

WATCH: VIVIZ drops the first teaser for debut album ‘Beam of Prism’ to be…

Vicky Kaushal’s Sam Bahadur to hit the floors in March?

Prabhas’ next to be with director Maruthi? Here’s what the director has…

Onir’s script on queer person in Indian Army rejected by Ministry of Defence; Filmmaker hopeful to make it

Lara Dutta reveals the reason behind her break from films: Got tired of playing hero’s girlfriend or wife

The curious case of Lord Ram’s birthplace as legal…