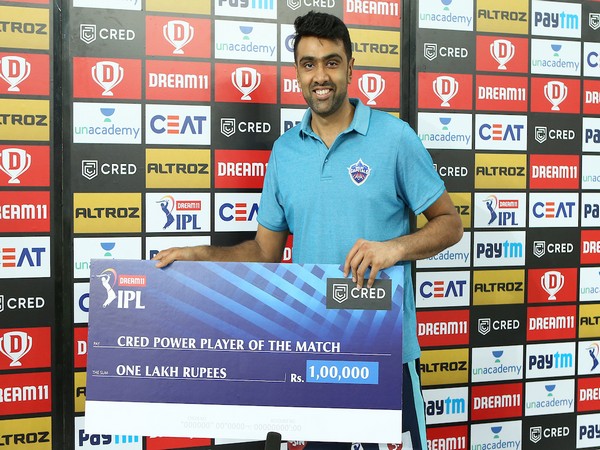 Dubai [UAE], September 21 (ANI): Delhi Capitals spinner Ravichandran Ashwin said that ‘pain has settled down’ after he suffered a shoulder injury in the opening game against Kings XI Punjab on Sunday.
The spinner said scan reports are good and might be available for the Capitals’ next game against Chennai Super Kings (CSK).
Taking to Twitter Ashwin wrote, “I was in pain as I left the field last night, but the pain has settled down and the scan reports are pretty encouraging too. Thanks for all your love and support.”

During the match against Kings XI Punjab, who were chasing a target of 158 runs, Iyer handed the ball to Ashwin in the sixth over. He bowled a splendid over as he scalped two crucial wickets of Karun Nair (1) and Nicholas Pooran (0).
However, in the last ball, he dived to save a single and hurt his shoulder in the process.
Ashwin went off the field with physio Patrik Farhart after he seemed to have dislocated his left shoulder and used the jersey as a temporary sling. He was seen in the dressing room with a sling on his left hand and an ice-pack on the shoulder.
In the end, Delhi Capitals trumped Kings XI Punjab in the super over after both sides posted 157 runs on the board.
After the game, Capitals’ skipper Shreyas Iyer had said that Ashwin will be available for the next game but the final decision will be taken by team physio Farhat.
Delhi Capitals will now take on Chennai Super Kings at Dubai International Stadium on September 25. (ANI)

Things will change for women cricket in India, the day they win World Cup: Anjum Chopra

From Taurus to Scorpio: 4 Zodiac signs who plan to have kids…